"She focused on her relationship with God" 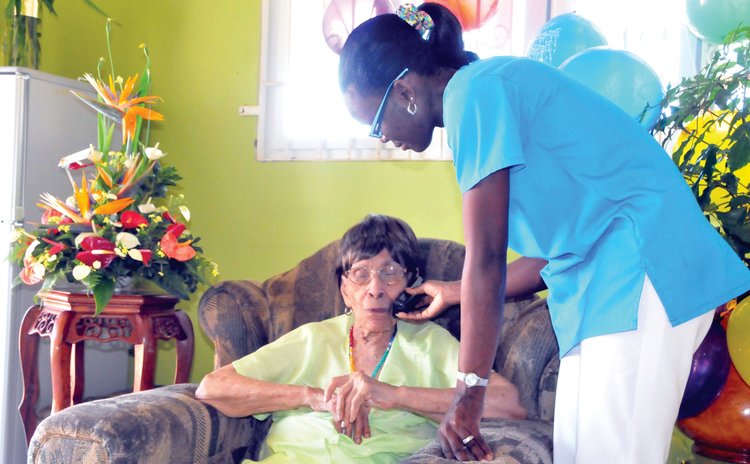 Alfreda Georges, affectionately known as Aunty Freda, was born in the village of La Plaine, Dominica on August 12, 1913 to Rosa Georges nee Bruney and John Henry Duport Georges. She was the last child of the union of Rosa and John who has seven children. Her father had emigrated from Antigua to Dominica to take up a post as headmaster of a primary school in the remote village of LaPlaine. He eventually retired as the Inspector of Schools.

Alfreda was at the tender age of five when her mother died and therefore she was left in the care of her father and elder brothers and sisters.

As a child, she enjoyed climbing trees and sea bathing - she loved going to the beach. She was very close to former Prime Minster Dame Eugenia Charles and her family and therefore spent many summers on the estates owned by JB Charles in the Pointe Michel area. She continued her sea bathing well into her late 80s.

She was awarded a scholarship to attend the Convent High School. After graduation, her first job was at with H.H.V. Whitchurch & Co. as an accounts clerk. She then joined the civil service, first being assigned to the Dominica Water Authority, then to the Housing Department and finally the Audit Department, where she retired as a Senior Civil Servant.

Upon retirement, an energized and youthful Alfreda was not read y to hang up her boots just yet. She had way too much more left in her. Given her long and extremely close relationship with the Catholic Church, the then Bishop of the Catholic Church, Arnold Boghart, agreed for her to manage the St. Agnes Book Store in Roseau- this she did successfully for well over 30 years! She was a devout Catholic and lived her life as such. She was active in the Church and very involved in Church groups such as the Legion of Mary and Our Lady of Mount Carmel. Later in life, she would tell me that her television station did not shift from EWTN (Catholic Television Network). She devoted her life to God and the Catholic Church was always the center of her life. One of her most memorable events was when she went to the Vatican to witness the ordination of her nephew and current Opus Dei Priest Father Mark Georges in 1999. On that occasion she was able to meet Pope John Paul II; what a momentous occasion it was for her. The photograph of their meeting was blown up, framed and placed in a prominent place in her living room.

Aunty Freda was devoted to her family - her siblings and their family. Her brother Edward Rudolph Georges, first born and father of Franklin Georges was a centenarian, died at age 1 03. In conversation with her brother she indicated that she would out-live him, making her eldest centenarian at 104 in the Georges family. She was very proud of everyone and their achievements.

I was fortunate to read the letters she sent to my father in the 1980s and 1990s which included detailed commentary on current events in Dominica. I distinctly recall one line in a letter read- "Ephraim, the economy in Dominica is doing very well - 'banana money wreaking havoc!". Also I recall her excellent penmanship.

Aunty Freda did not hide her politics at all-a strong supporter of the Dominica Freedom Party and therefore her childhood friend, the late Dame Eugenia Charles. I remember on occasion criticizing a policy of the then government to her - what a mistake that was - she would vigorously defend her government. What I noticed then was not only how articulate she was, but how structured she was in her arguments defending her position. Yet, she was such a simple person. I recall that we wanted to have a big celebration for her 95th birthday. She said all she wanted was breakfast with scrambled eggs and ham. Simple

Aunty Freda was blessed with a very long life - she always attributed that to her strong faith in God. Yes, she was a healthy eater who exercised regularly but most importantly she said she focused on her relationship with God. This was the case when we last met in 2016 at the age of 103 she was able to recite the song "Gentle Woman" word for word with my mother and father. What a legacy she leaves for us.

May her soul rest in eternal peace.

(Funeral Ceremony was held on Wednesday 23rd May, 10am at the St. Gerard Catholic Chapel, Roseau)