"She was a brave and hard working woman" 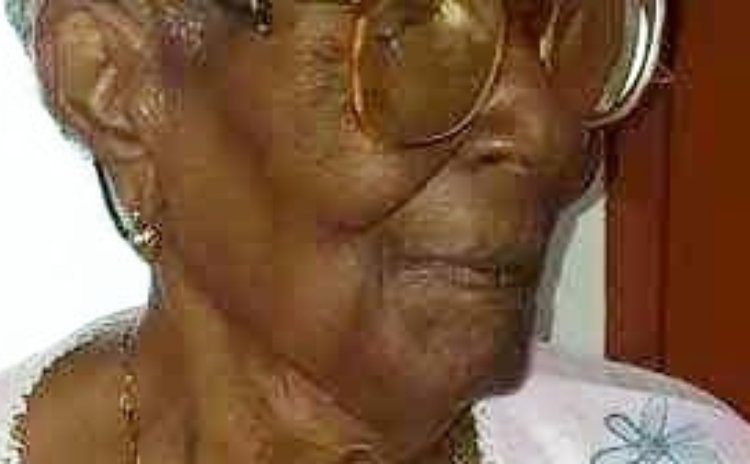 Keturah Angel Alexander was born on April 4, 1920, 100 years and a month ago, in the village of Castle Bruce. She was the first and only member of her immediate family to have reached the 'century mark'.

She had a basic elementary education.

As an adult she was blessed with six children, two of whom died as babies/infants. Her children who outlived her are two boys and two girls. They are Mrs. Valentine Sonnilia Smith who lives on St. Croix, Juliana Collins who lives in Virginia, USA, Rawle Bannis who is on island, and Dr. Colmore Christian who lives in Alabama, USA.

After her children were all grown, Ms. Alexander raised five of her grand-children: Reginald, Catherine, Sandra, Sonia, and Colin as well as one great-grand-nephew: Irvin.

Ms. Alexander worked hard and sacrificed to be able to send two of her children to high school. She worked as a cook at the Pont Casse work camp, serving land surveyors and road building crews working on the Bells and Castle Bruce road construction projects in the 1960s. At that time, she had to hike from Castle Bruce to Williams to catch a ride to Pont Casse every Monday to work, and back the same route on Fridays for the weekend because there were no roads to Castle Bruce then. It should be noted, however, that there were usually other individuals on the same hike, and so she was never alone on these trips.

Along these weekly Castle Bruce to Williams forest treks she had to navigate hills and valleys, and negotiate at least five treacherous and dangerous river-crossings along the Belle Fille, Fond Figues, Senhouse, and Yellow Rivers. Today, most of these rivers are relatively dry, but imagine having to cross an overflowing Belle Fille River or a swollen Yellow River in the 1960s when the water-catchments of these rivers were heavily forested?

Ms. Alexander shared several stories about her five-year experience as cook at Pont Casse. The very cold and windy evenings she had to endure, the disrespect from the predominantly male work-team, and limited support from her supervisors. But she endured and sacrificed in the best interest of her family and to complete the building of her house.

In the early 1970s she was once again employed as a cook for a short period serving a Public Works team which operated in Castle Bruce.

Ms. Alexander loved dancing quadrille. She was an active member of the Dominica Trade Union, and a quiet but respected member of the Castle Bruce community. She received a Plaque of Recognition from the Castle Bruce Credit Union. She used her permanent US citizenship privileges to visit with her children and grand-children in the Virgin Islands and mainland USA, but preferred living in Dominica.

Ms. Alexander relocated to Colihaut approximately ten years ago to live with her daughter-in-law, Evadney.

On the evening of Friday, May 1, 2020 she was called to meet her Maker. She holds a special place in the hearts and minds of her children, grand-children, and many of those who knew her well.

May her soul rest in peace.