She was born during a pandemic but couldn't survive another 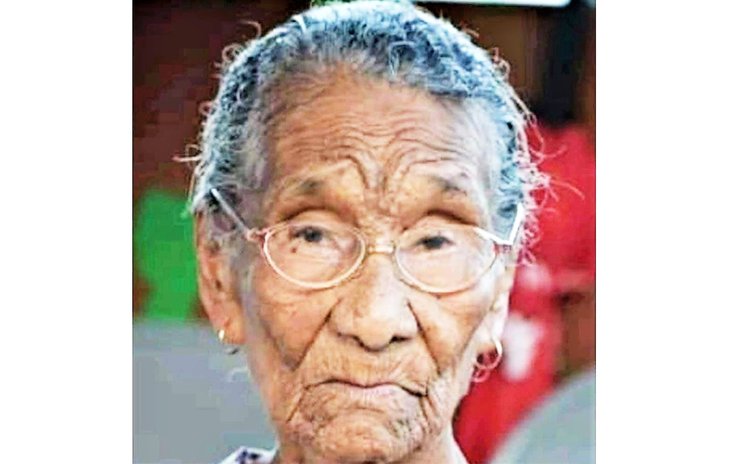 Surviving the Spanish flu was just one aspect of Elizabeth Auguiste's eventful era on earth. She lived a life of adventure that spanned over a century. Fell in love and married her life partner Willie Auguiste and bore 12 children. And then this month, at the age of 107, "Ma Willy", "Mama" or "Ma Zabet," as she was affectionately known - a life ended the way it began — in a pandemic.

Confirming the death of the woman who was heralded as being Dominica's oldest living person, the Dominica Council of Ageing (DCOA) said in a press release that the Crayfish River resident succumbed to COVID-19 on October 16, ending a brief stay at the COVID Hospital in Portsmouth.

According to the statement, she was already bedridden and suffered from painful knees, an occasional upset stomach, and weakness attributed to her 107 years among us.

The Council goes on to note that the gem who was born on March 21, 1914, in Bataca will be remembered as a community luminary, loved by all those who knew and paid attention to her.

Jennifer Tyson, her daughter, and main caregiver remember her as having worked hard, manufacturing castor and coconut oil as well as farine and other such products.

After her 100 birthday, Ma Willy attributed her longevity in part to her diet growing up which included farine, cassava bread, kankey, porridge especially tannia and toloma porridge, cane juice, crayfish, shaloop, vio, cacao tea with coconut milk, and cane juice as the sweetener.

"She worked a hard life and I know that she fought all the way until the end," President of the DCOA Ophelia Olivaccé-Marie stated to the Sun.

According to the president who revealed that she has been in contact with members of the centenarian's family, given the improvement Ma Willy was making, health officials predicted that she would be released on October 17 from quarantine; however, she passed two days before.

"It's really sad that she is the first centenarian who has left us due to their virus and I didn't realize I was so close to her in spirit. I wish there was something we could have done but there's nothing we can do," she stated. "And that is what makes COVID difficult to take."

She encouraged the public to work on their immune systems by eating the right foods and getting enough vitamins. Olivaccé-Marie who is against mandatory vaccines- especially for our seniors as she believes it should be their choice- further emphasized that the public should do their research and if confident that the vaccination can protect them then they should proceed to take it.

Olivaccé-Marie has also confirmed that Auguiste was only the second Centenarian who tested positive for COVID-19, the first being Veronica Elsina Burton who has since recovered.

In light of the COVID-19 virus, the president warned against visiting the seniors- especially the remaining centenarians but urged the public to "check-up on them" in the safest way possible as often as they can.

"Even if that means calling the caregivers to pass on a message to them, simply saying we love you, or some other kind words, we can call the radio stations and mention their names, they will love that but we can't just forget about them," she stressed to The Sun. "Nowadays, I hear more people praying out loud and including the elderly as a group. That is what we need to do more of, consider them as a group and try to let them hear the messages even if they cannot see us."

Expressing her thoughts on the death of these individuals -seven within the past seven months- she noted that the news of their passing always comes with mixed emotions, mainly good ones, as she and other members of the council have developed a personal relationship with each centenarian.

"And the pain for me is the fact that I get to know them, and then they have to go. But we know that they have to go, and they can't stay with us forever but still, it really is painful and I wish we could find a way for them to go with a little more ease."

With the death of Ma Willy, Anastasie Charles better known as "Ma Maggie" of Wesley aged 107, is now the oldest living person on the island.

Less than a week before the passing of Ma Willy, the national also learned of the death of another centenarian 102-year-old Anastasie George better known as "Ma Jazz" who died on October 11, 2021.

Born on 22 July 1919, she was a vendor at the Roseau market and would walk from Roseau to Morne Daniel to get mangoes. She also worked at the Newtown Lime Factory for many years.

Dominica, which is said to have the highest number of centenarians per capita, in March of this year increased its tally of living centenarians to 27, but sadly within the past few months, seven of the island gems have passed away.