From our Archives: Anniversary of the death of Prime Minister Rosie Douglas 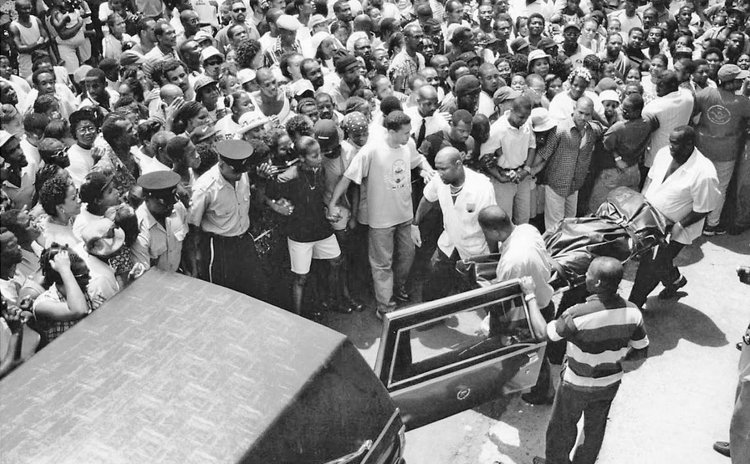 The day Rosie died: Crowd parts as his body is taken to the funeral home

Words were inadequate to capture the mood of Dominicans as they grappled with the news that Prime Minister Rosie Douglas had died suddenly, apparently from a massive heart attack at about 7 a.m. on Sunday, October 1, 2000.

"It was a giant shock; I was sad; I was extremely emotional", said Attorney-at law Anthony Astaphan.

"When I heard the news I rushed to Portsmouth and there he was lying on the floor dead," said Reginald Austrie, parliamentary representative for Cottage.

Ports mouth mayor, Roger Brewster, the man who may contest the inevitable by-election for the Dominica Labour Party (DLP) said the town will never be the same again.

"The mood in Portsmouth is one of sadness, loss and irreparable damage. There will never be another Rosie Douglas. No one can fill his shoes," Mayor Brewster told the Sun.

Douglas represented the Portsmouth constituency in opposition and then as Dominica's prime minister after he won the January 31, 2000 elections. He is the country's first prime minister to die while in office.

Douglas returned to Dominica on Saturday afternoon after a month-long trip which took him to Japan, Australia, New York, London and Jamaica. On Sunday morning after telephone calls to a few members of his Cabinet, Douglas was walking from the drawing room of his humble home in Portsmouth to the bedroom where he collapsed and died.

His death heralds a new chapter in the history of Dominica and of the DLP. On Sunday the party's executive named deputy leader and the Grand Bay parliamentary representative, Pierre Charles, as the party leader. He is widely expected to be appointed Prime Minister by his Excellency President Vernon Shaw.

Charles will have an extremely difficult job.

For Cabinet ministers like Austrie, the tasks of rebuilding the country devastated by economic decline will be herculean.

"We intend to pick up from where Rosie left off and to make this work and to make some of his dreams real," Austrie told the Sun. "I think we are going to come out of that strengthen".

Housing Minister Vince Anderson probably summed it up when he said: "I think in Mr. Douglas we saw the emergence of a great leader, one who had so much to accomplish."

At press time the date for the funeral service of Prime Minister Douglas had not yet been announced.