JUMP BALL No. 102. By Arlington James 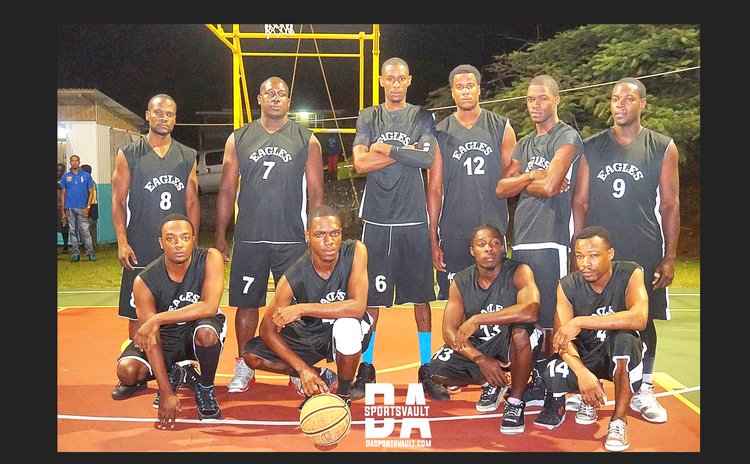 Part I of the article presented the involvement of a villager from Paix-Bouche in Soufriere's first basketball league, and Paix-Bouche teams that competed in the national league from 1991 through 2006 – though not continuously. The article continues below.

Teams In National League (Ctd): That year (2006) the Eagles from the north, playing in 'Premier', sent a strong message to Dominica's basketball fraternity that they were no 'walk-over' or 'push-aside' 'country' team. Their Derrison Anthony was "considered probably the best player in the league" in 2006 (The Chronicle, 1st September 2006).

Among their victories in the Regular League as they marched to the Premier Division playoffs, Eagles defeated Faith (82-63) and Bullets. They also overpowered Knicks in the semi-finals, en route to meeting X-Men for the championship. According to The Chronicle of 1st September 2006, Eagles "took the game (#3) down to the wire in the final game of the best-of-three finals. However, they succumbed to the experience of the X-Men losing by two points in a nail-biter. Final Scores 61-59". And so, the new-look Eagles emerged runners-up in the 2006 Premier Division League Championship.

Come 2007, the Eagles flapped their wings with extra power and would have had good reason had they inscribed, boldly, on the walls and roadway in their village: 'Paix-Bouche Eagles – 2007 DABA Premier Division Basketball Champions!'. According to The Chronicle of 3rd August 2007, "Paix-Bouche Eagles were on the brink of being eliminated from qualifying for the playoffs". They then went on to "win nine games in a row culminating with a clean sweep of the Marigot Sonics in the best-of-five National Championship Series 63-61 in the final", and to bring home their first piece of silverware from the DABA League up to Paix-Bouche.

In 2007, then in 2010, teams named Home Side Snipers and Raffoul Snipers respectively participated in DABA's 2nd Level Men's Division.

Eagles modified their name to Paix-Bouche Super Eagles from 2014 whilst Snipers did not register in 2015 but returned in 2016.

The year 2014 was another historic year for Paix-Bouche basketball when, for the first time, three teams from the village – including their first women's team participated in the national league. Joining Super Eagles and Snipers were Northern Starz who played in the Women's Division, against Lady Maggnificos, Lady Pros, Panthers and Marigot Women. Northern Starz played again in 2015, but in 2016 we saw a new women's team, Lady Challengers replacing Northern Starz and carrying Paix-Bouche's basketball flag.

Super Eagles in 2015 may have set a record in the national league when they scored a huge 41 points in the 4th Quarter of their game versus Tigers. Some of their wins that year were against Tigers (109-49), Falcons (92-75), CrossOver (90-69) and X-Men (90-69). They had also amassed 46 Three-Pointers in the Regular League, with Derrison Anthony responsible for 25 of those long ones.

Also in 2015, Nathan Jno. Jules received the awards for the Premier Division Player of Week #2 and Week #9.

In 2017, before Hurricane Maria interrupted the national league two teams represented Paix-Bouche in DABA's national League. Snipers played in the 2nd Level Men's Division (Division I) whilst Snipers Under-17 competed in the Under-17 Division. Eagles abstained that year.

Keeping the ball bouncing during the post-Maria era, Paix-Bouche Super Eagles regrouped and competed in the Kelver Darroux Basketball League in 2018 in St. Joseph, and Paix-Bouche Eagles in the DABA-7Six7 Entertainment Mackeson Basketball Cup staged in St. Joseph in 2019.