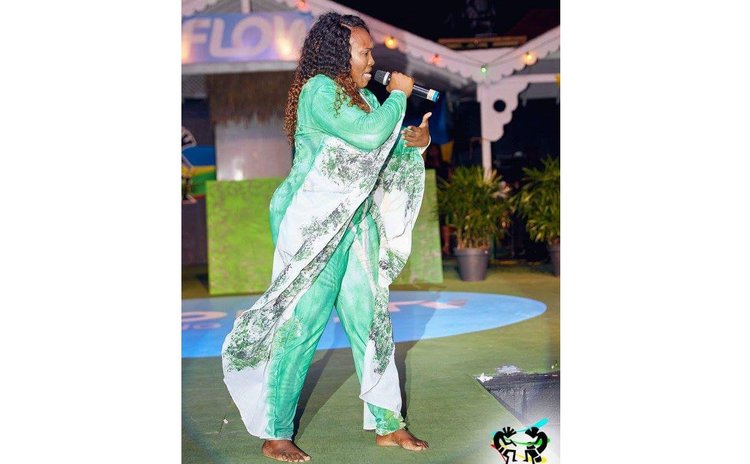 Showdown Mas Camp kept the island's flag flying high this year as a number of its representatives placed in the winners' row in various regional Calypso competitions.

Based on the artistes' promising performances, Showdown Mas Camp plans to extend its calypso market share and make great headway in the region, under the extended banner of MAS CAMP CARIBBEAN.

The latest successful contender was Charis Daniel who stormed into the winner's row at the Nevis Culturama Calypso competition in August.

The singer from the Nature Isle unleashed one of the richest and most alluring singing voices at the event and captivated the audience with her charm and offhand charisma on stage. Her renditions of two intriguing calypsos--'Nobody doh Love me' and 'Not Loving thy Neighbour'-- made her a strong contender to be the calypso monarch. In a tight finish, she was adjudged second runner-up, cementing her status as an exceptional new artiste.

Charis said she absolutely loves calypso and made her debut in Dominica in 2015 with encouragement from director of Showdown Mas Camp (Showdown Entertainment Development), Pat Aaron. In her debut year, she won the 'Champ of the Camp' crown, and the next year she made it to the semi-finals of the calypso competition. She has since moved to Nevis where she bravely decided to compete in the annual calypso competition.

A newcomer to calypso in Nevis, Charis was a bit nervous about how the audience would receive her, considering that she was relatively unknown and on foreign soil. But she quieted the butterflies in her stomach and gave it her best shot.

She said she believed her two Calypsos would give her an edge in the competition. Her first song, 'Nobody doh Love me' is about Mother Earth, suffering in silence as the ultimate victim of the consequences of poor choices.

Her second song 'Not Loving thy Neighbour' urged the judges to give her the credit she deserved even though she was a foreigner. She delighted the gathering by performing this piece in a costume bearing the flags of Nevis and Dominica.

Both songs were written by Dominican songwriter Pat Aaron. Her calypso mentor, Pat Aaron said Charis' performance in Nevis is a clear demonstration of the calypso talent in Dominica. Dominican Everlyne 'Ebony Empress ' Walters also represented Mas Camp well in the St Maarten calypso competition where she placed third. This was her debut performance as a calypsonian. St Lucian artiste Oshun also did a great job with what was considered to be one of the most popular songs in the competition there.