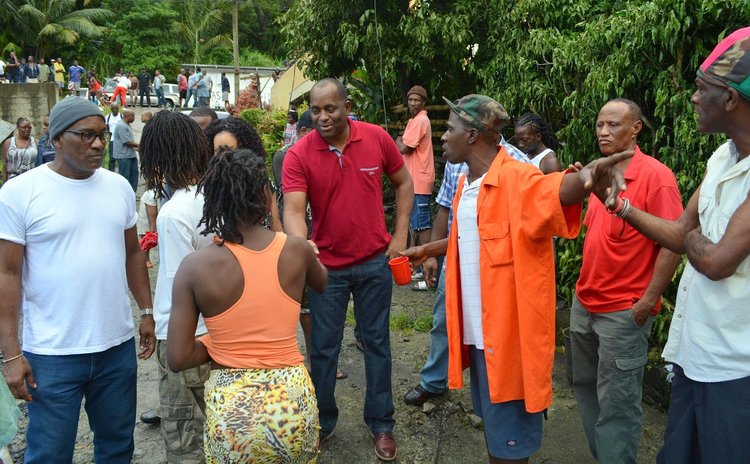 Prime Minister Roosevelt Skerrit, members of his cabinet as well as the opposition members of parliament visited Silver Lake earlier today following a fire on Boxing Day evening that left about 60 people homeless.

In a press statement issued after the visit PM Skerrit promised the victims immediate assistance including new homes and financial assistance.

"From last night the Government officials and some Ministers were on site to provide support. The ODM (Office of Disaster Management) which is the Government agency responsible for disaster management is coordinating government's response and that will be led by the head of the ODM Mr. Fitzroy Pascal and also our consultant Mr. Cecil Shillingford. And he will speak to the actions that the ODM has taken in response to disaster, the opening of shelters, provision of supplies to the shelters. We will certainly deal with the immediate, and medium term, and long term response to the fire," the statement said.

PM Skerrit added: "I was able, along with several of my Minister colleagues to visit the site this morning and to meet with the victims. We were able to address them; we were able to hear from them as to what are the issues, what kind of assistance they believe the government can provide in addition to some of the assistance which the Government would be providing.

"We have been able to send heavy equipment on site this morning; it is currently on site doing some clearing so that we can minimize hazards that are present there in the first instance. Secondly, to prepare for the construction of the second set, third set of apartments in Silver Lake.

"Tomorrow morning the Government will provide the head of each household - we have 20 families that have been reported to have been affected by the fire - and tomorrow morning in addition to the clothing and the food stuff and all of the necessary supplies which the families will be provided with, the "Government will provide each family with $1,000 EC to allow them to be independent and to be able to shop for some of their basic things that they would require. People may have certain likes and dislikes, therefore we would give them that freedom to be able to shop for themselves in addition to all what the Government will be providing to them.

"Following this $1,000, the families will be provided weekly or fortnightly or monthly, and that will be determined, an income support allowance similar to what we provided the residents of Petite Savanne following T.S. Erika but the whole idea with the apartments is to have them constructed in record time so that we can minimize the dislocation of those families and resettle them with great speed.