Jump-Ball: A peek at local basketball then and now 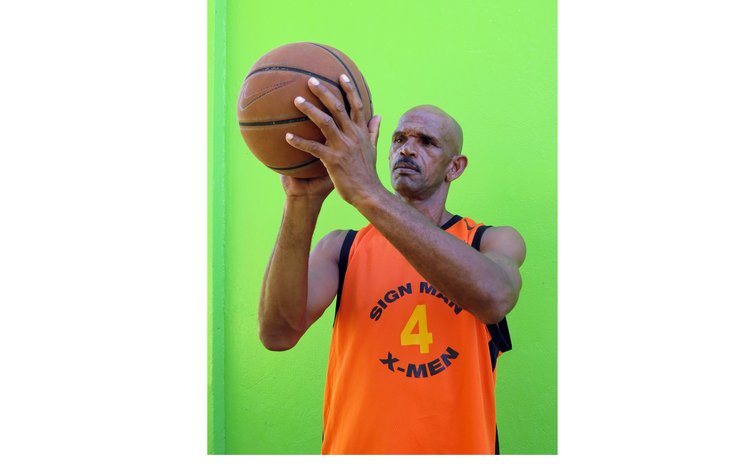 Basketballers, his family, siblings and friends know Simon Joseph of the X-Men basketball team simply as "Toto", although at one time he also carried the nickname "Flour Power" due to his working at a wholesale company at the time, his physical strength, and him grabbing several rebounds in basketball games.

As a young boy growing up around the Windsor Park in the 1980s, "Toto", like many of his peers, got involved in multiple sports - in his case cricket, football and basketball, and even played with Blue Stars in Division II in the national football league. However, he later decided to channel his energies into one sport, i.e. basketball, and he made his debut on the court in the national basketball league in 1987, playing in the centre position with Reefs in Division III. In those days as many as eight "junior" (Division III) teams competed in the national (DABA) league, and the first team Joseph remembers playing against was Smashers from Grand Bay.

Simon Joseph got selected on to the Senior National Basketball Team over a period of 10 years, i.e. from 2000 through 2010, and represented Dominica in the revived Windward Islands Basketball Championships in Grenada and St. Vincent, in the Sugar-Creole Championship in St. Kitts, and in an Invitational Tournament in Bequia (one of the Grenadine islands).

Playing in DABA league games, Simon originally wore jersey #33, i.e. the number worn by Scottie Pippen of Chicago Bulls in the NBA of the 1980s. However, he has been wearing #4 from the days of playing with Knicks. Although Toto remembers top-scoring for his teams on a number of occasions, his personal best was an impressive 38 Points for Killer Bees, vs Flames. On another occasion he hit a 33 Pts, and during the last 5 seasons his best score was 28 Pts, vs Blazers. Toto's leadership skills were put to good use when he first captained Reefs, and later Kicks for five seasons. In 2000, he received the DABA award for "Most Improved Player" for his performance in the national league that year and subsequently he was selected to the national basketball team that same year.

Over the nearly three decades of bouncing ball, "Toto" also played in several "off-season" and community basketball leagues including the DABA Off-Season League at Windsor Park, and community leagues at Trafalgar, Pointe Michel, Mahaut, Massacre, the Roseau Improvement Committee (RIC) League, and the Fond Colé League which, in his opinion, was the best organised among those leagues.

Apart from making his contribution to the sport as a player, "Toto" has also assisted in refereeing Division II matches, served as a Table Official, and was Assistant Coach of the Dominica National "All-Star" Women's Basketball team for an engagement against a team from Martinique, in Dominica. He also served as a Committee Member on the Executive of the Dominica Amateur Basketball Association (DABA) for a short while.

Reminiscing a bit, "Toto" remembers the days when, after playing a session of "sweat" or pick-up games at Windsor Park, a few "stragglers" would challenge each other in Free-Throw Shooting friendly competitions, where you'd shoot until you missed! He remembers scoring 19 consecutive Free-Throws in one such encounter with many deliberate distractions.

"Toto" has seen and played basketball in the 1980s, 1990s, 2000s, and now in the 2010s, and he is of the opinion that today's players do not take the game seriously, and they don't seem to put much importance to training as in the past.

When asked, which is the team in the local basketball league that he loves or enjoys playing against the most, "Toto", generally soft-spoken, was quick to respond, "Blazers!" He admitted that playing against Blazers – the 2015 National Play-Off Champions and holders of several other basketball championships – gets him to "up his game". Simon Joseph, although twice the age of some of his basketball colleagues and opponents, still has a few more years of service to contribute to basketball in Dominica before retiring from the sport. Impressive work, Toto! Keep the ball bouncing!