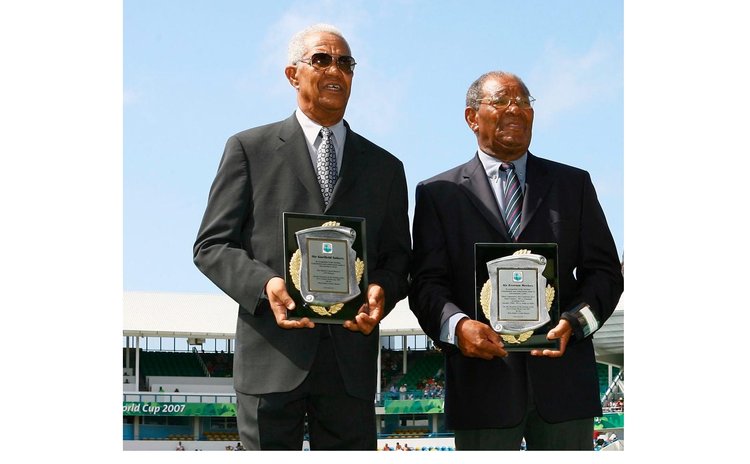 Legendary West Indies batsman Sir Everton Weekes has died at the age of 95.

Weekes, who scored 4,455 runs at an average of 58.61 in 48 Tests, is the only man to make centuries in five consecutive Test innings.

He was known as one of the 'Three Ws' alongside fellow West Indies greats Sir Clyde Walcott and Sir Frank Worrell.

"Our hearts are heavy as we mourn the loss of an icon. A legend, our hero," said Cricket West Indies (CWI).

"Our condolences go out to his family, friends and many fans around the world."

Batsman, coach, commentator, bridge player, knight - Weekes' glittering life Weekes has the 10th highest average in Test history, among those to have played at least 20 innings.

He, Walcott and Worrell were part of the first West Indies side to win a Test in England in 1950.

Weekes was the third oldest surviving men's Test cricketer, after South African John Watkins and England's Don Smith, both of whom are 97.

The Barbadian, who made his Test debut against England in 1948, retired in 1958 and received a knighthood in 1995.

He was taken into intensive care in hospital in June 2019 after suffering a heart attack.

CWI president Ricky Skerritt said: "A most amazing pioneer in West Indies cricket. A tremendous gentleman and a wonderful human being. He was literally a founding father of our cricket."

West Indies Players' Association said: "We salute a great West Indies icon; Sir Everton made an invaluable contribution to the sport, his country and the region.

"We were blessed to have him among us, may his soul rest in peace."

The MCC said: "Everyone at MCC and Lord's are saddened at the news of Sir Everton Weekes' passing.

"He will forever be remembered as one of West Indies cricket's finest cricketers."