Sir Hilary Beckles: The Players Have Performed! It's The President's Turn 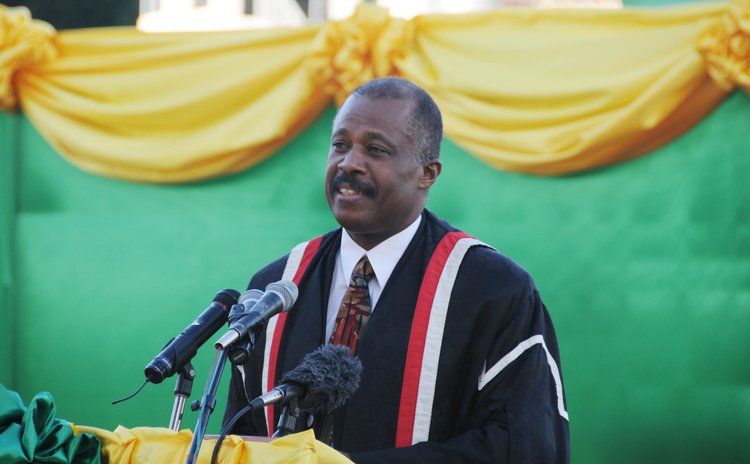 The ancient monument that is West Indies cricket excellence, built over generations, glowed in a golden state in a stadium of the East Indies. Our young women and men showed their capacity for resistance and resilience while demonstrating, once again, their commitment to performance excellence. It was as historic an event as it was memorable entertainment. Windies rose in gendered solidarity and restored their nation to a pinnacle of global cricket leadership.

By winning World Cups in the coveted, cash rich T20 format, West Indians, bursting with passion, proved to the world of critics without compassion that they are advocates of a sophisticated civilization perfectly ready for winning performances in the pressurized global space that seeks to marginalize our small states. Our women and men have sent a powerful message into the universe.

2016 is the epitome of a long, hard journey to justice. From 1886, when the West Indies team was invented, and went on its first tour that year to Canada and the USA, to 1927 when it received Test status, to 1950/1 when it ended England's rule and moved on to challenge Australia for the World Test title, to 1978 to 1995, when it dominated first the Test nest and then the One Day International (ODI) arena, to this day, 130 years later, West Indies cricket has been surrounded by mentalities lacking in generosity and scientific observation. This mind is now represented by English writer/commentator Mark Nicholas.

Commenting upon our loss of Test dominance, Nicholas says that he sees nothing in West Indian society to indicate that the team has any further leadership role. He concludes that so intellectually backward and bankrupt is Caribbean culture that our golden years of dominance in Tests and ODIs should best be described as a 'fluke'. As he and his cohort watched the Windies rise on Saturday and take control of the T20 game, in much the same way that they did Tests and ODIs a generation ago, it is unlikely that he reflected upon the miserable nature of his musings. The jaundiced mind sees no light in space even in the face of the blazing sun, but the trail speaks for itself. No other cricket nation has dominated all versions of the cricket game. Windies alone has done this. Nicholas might wish to take this fact into his festival of folly.

Captains Sammy and Taylor are no ordinary leaders. With their players drawn from a nation of post-colonial citizens, they stood against teams from countries with populations and gross domestic products thousands of times larger, and proceeded to mobilize their mentality that knows no boundaries. A young woman (Hayley Matthews) and a young man (Carlos Brathwaite), both debutantes, green behind their ears in the maroon wear, allowed their imaginations to run away with them. In their flight they took the game with them. They had the audacity and the nerve to be bold and courageous, and to say to the old foes "We are West Indies" in a fashion only David Rudder knows best.

It has been 130 years to this moment of glory. First came the Under 19s, then the women, and finally the men; all champions of the world beyond the Caribbean. Hayley dancing down the crease as if in a dance hall, and hitting sixes to long on, was the perfect precursor and segue to Samuels whose elegance exploded in stubborn artistry. Together they laid the foundation for a finish too far-fetched not to be fictional. But it happened; written on a silk screen in the symbols '6,6,6,6 and done'. It was as if Armageddon had commenced.

Master Gayle did what he had to do with the English at the beginning. He ripped their hearts from their chests, leaving a poor man exposed to the bombast of Brathwaite in the business moment. Empires never fall with dignity. Prime Minister Cameron's call upon us to forget our collective history and to move along has something to do with this. And this is why we have The University of the West Indies that stood elevated, again, as Brathwaite, its student and captain of the Cave Hill Cricket team, raised to excellence within its faculty and the Combined Campuses and Colleges culture, dug deep into our past and came up with an intellectual answer for the future.

All that is now required is for the WICB, president and directors, to complete the over. There are two balls left to face, one is to accept the governance reform that calls for the Council of Stakeholders as set out in the Patterson Report, and the other is to recognize that by accepting the governance interdependence of cricket and society is not to lose autonomy. Two balls, two sixes, and we are home!

The players have done their job on the field. It is now for the president, whose heart resides in cricket as much as any one of us, to do his and lead his board boldly into the rest of the decade with public support and popular legitimacy. Without this reform, West Indies runs the risk of being razed to the ground by internal conflict and acrimony. The golden monument we have all built as a tribute to our cultural tenacity and collective wisdom must come first. This is your task, Mr. President. It's a duty of your generation.