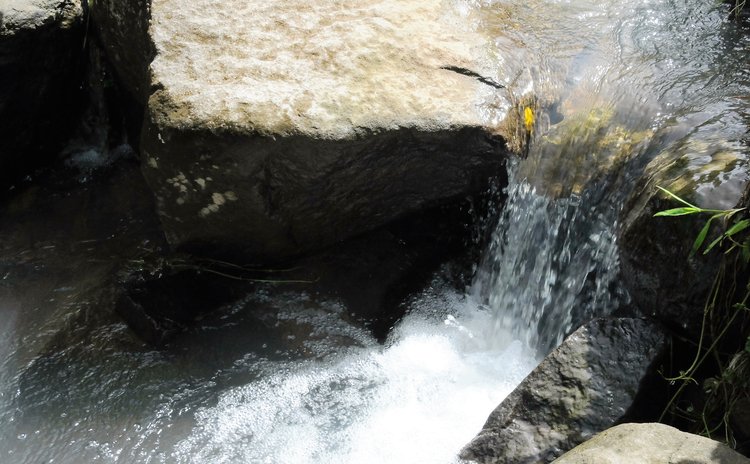 Typical Dominica water source; this one is in the heights of Salisbury

It's a virtual no-brainer.

He points out that Dominica has a distinct advantage because its water surplus remains intact, even as the region's water demands and deficits continue to climb.

He asserts that places in the region with water reserves that rival Dominica's tend to be mainland nations — like Guyana and Belize.

"It's a product we have that is available in huge quantities. . . a renewable resource . . . we don't have to invest any more than we have invested," he maintains.

"Dominica has been ready to export water in bulk, but we have not offered it for sale. . . Dominica has not in the past effectively or aggressively advocated or marketed its water," he argues.

In his view, Dominica's water surplus after meeting its own needs can easily support up to four bulk-water exporting companies.

"Absolutely," he declares, adding, "We have the reservoirs, the reserves of the resource, and the technology is simple."

"Unfortunately, for whatever the reasons, we have not let even the region know that Dominica can help to alleviate their water problems and offer a fourth option.

"We are trying to encourage the water company here [DOWASCO] and our policy makers here to see that as almost a no-brainer for Dominica . . ." he says.

There are many pluses for Dominica as a bulk-water exporter, Martin says. First, the water quality is high, even exceeding the requirements of WHO/PAHO.

Furthermore, there is an abundance of water here with 10 major river systems each depositing 150 million gallons of water every day into the ocean.

"Our forest systems, protected by law, was the investment we made in water. . . the trees are still there. If we had deforested, we would not have had that surface water," he points out.

His company has been preparing to begin bulk-water exports, starting with Anguilla.

But a major challenge is that Caribbean islands are generally not equipped to receive bulk-water.

Interestingly, Anguilla is the only Caribbean island with infrastructure in place to import bulk-water, despite other islands recording monthly water deficits amounting to millions of gallons.

In fact, Sisserou Water Inc has just negotiated a long term contract with Anguilla, and the island has indicated its readiness to import bulk-water.

"Other islands. . . experiencing water deficits. . . periodic shortages of water because their systems are unable to maintain constant and steady supplies . . . have not invested at all in receiving capabilities," Martin says.

He adds, "Frankly, in addition to setting up our company to be in the business of exporting water, we have had to become an advocate of Caribbean security in water. . .

Sisserou Water Inc. was granted a license to extract water from the Melville Hall River for extra-regional exports but subsequently changed plans.

"In 2011 we had been asked by the Government to shift away from extracting for extra-regional export . . . to consider purchasing from DOWASCO to supply regional markets. And this is what we did," Martin explains.

In this regard, he says DOWASCO has been cooperating fully with Sisserou Water Inc.

Martin acknowledges concerns in some quarters that desalination plants would present a challenge to Dominica's ability to sell bulk-water.

"There was a thought that the 'desal' plants, which are now evident in many countries, would present a challenge to Dominica's abilitiy to sell water.

"But actually, no. Because 'desal' requires the destination to make an investment, not only in the facility, but in energy. . ." Martin explains.

"We have found buyers in all these countries, in the private sector and some public sector agencies . . . interested in reducing their dependence on 'desal' for a number of reasons, such as the cost," he adds.

Dominica can deliver bulk-water at a cost of only 65 percent of the cost of production of desalinated water, he says.

Martin said Sisserou Water Inc doesn't intend to be the sole bulk-water supplier for any nation. Indeed, he advocates that nations must not to depend on one supplier.

According to Martin, Sisserou Water Inc will use tugs and barges to transport bulk-water to Anguilla; as regional demand increases, it will explore other options for shipment.

Sisserou Water Inc will export from the port facility at Cabrits.