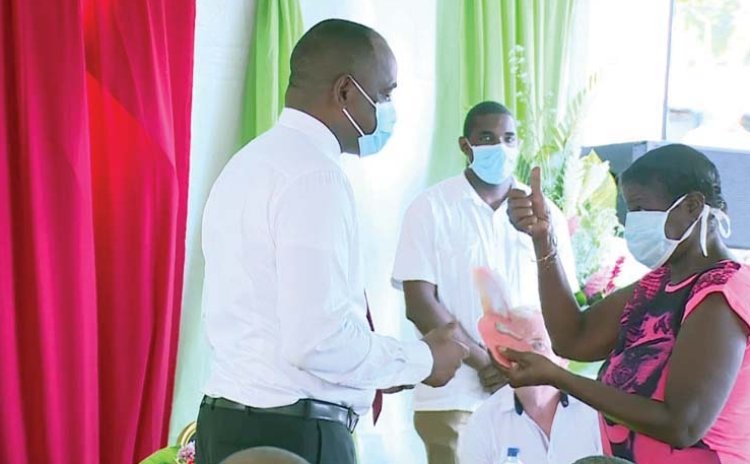 In a couple of election-like-campaign-events, the Roosevelt Skerrit administration last week handed over 60 housing units to people of Grand Bay and Jimmit.

"This is the day that the Lord has made," said Anthea Casimir, a recipient of a unit in Geneva, Grand Bay during a ceremony on Wednesday. "No longer will I face eviction, walking around with a heavy heart, yearning for a home of my own."

"Tomorrow will be greater than today," said another elderly woman, her black mask hanging from her chin, who received a home at Grand Bay. "Who God bless no man curse."

"My God what a feeling! This apartment building is a sight to behold," said Josette Jno. Baptiste, the Deputy Chairperson of the Mahaut village council at the Jimmit ceremony on Friday.

"These houses should be considered not low income housing but housing for low income persons," said Housing Minister Reginald Austrie adding that the new owners can consider themselves to be almost millionaires. "You didn't expect to get that."

"The poor are made rich, those who were suppressed under rent for many years, they are set free. They were almost like prisoners under rent for years," echoed Parliamentary Representative for the Grand Bay Constituency, Edward Registe.

"There are many out there who will not receive a key today and that bruises his heart," Registe said, "But the 30 who will receive, I am certain they are going to be appreciative of it and that warms my heart."

With funds from the Citizenship by Investment Programme (CBI), Government embarked on what it called "a housing revolution" after the island was battered by the category five Hurricane Maria on 17 September, 2017.

"We see a situation where the individuals that now are benefitting from this housing come from our vulnerable groups," said Permanent Secretary Reginald Savarin to CSGlobal Partners in a press statement. "In Grand Bay we are assisting 138 individuals; thirty homes, thirty families; and out of that 30 families, 138 individuals, we have counted that eighty children, that it is individuals under the age of 16, will be benefitting. So we are definitely addressing one vulnerable group in the Grand Bay area."

Savarin said around 107 individuals would benefit from the 30 units at Jimmit.

In September 2018, the Government signed an agreement with Montreal Management Consultants Establishment (MMCE) for the construction of the first batch of residential units across the island as part of Government's Housing Revolution. Housing apartments have been constructed in Portsmouth, Bellevue, Castle Bruce, Grand Fond, LaPlaine, Delices and San Sauveur.

"The large-scale project was entirely financed by Dominica's Citizenship by Investment Programme – an initiative that enables investors and their immediate family members to acquire second citizenship through an economic contribution," a Government of Dominica website states.

Nevertheless, the opposition United Workers Party (UWP) has severely criticized the housing programme for its lack of transparency. The UWP maintains that more than $1.2 billion from CBI funds have not been deposited in the Government's treasury as the law provides, there has been no competitive bidding and CBI Housing funds are being used without parliamentary authorization by Prime Minister Skerrit and MMC.