Skerrit and Venezuela: Standing with his man 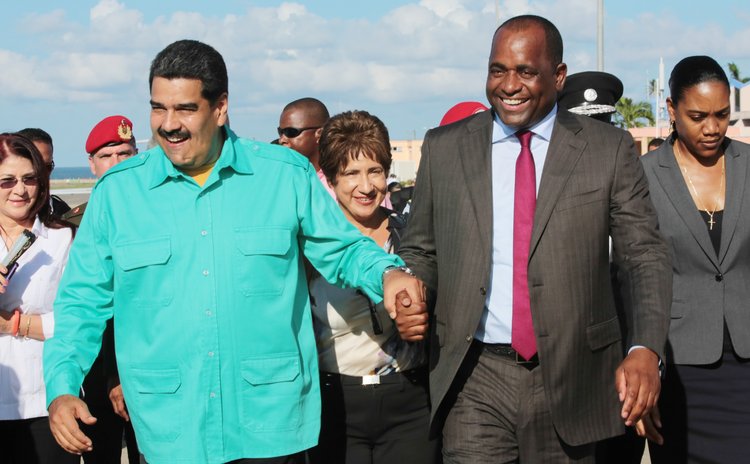 Dominica has been placed in an "unfortunate position" of having to persist with its support for the Nicolas Maduro government in Venezuela against the opposition amid the ongoing street protests, not only placing it at odds with the Trump administration but with some key members of the Caribbean Community, according to a leading foreign policy expert.

Prime Minister Roosevelt Skerrit makes no secret of where he stands on the developments in the South American Spanish-speaking country, which is involved on open warfare with the Organization of American States (OAS).

Since developing a close relationship with Maduro's predecessor Hugo Chavez, Skerrit has depended on Caracas to prop up his social programmes through various means, including PetroCaribe and the murky ALBA initiative.

However, Venezuela's economy has virtually collapsed there here have been growing unrest across the country, with some 50 people killed and hundreds injured during protests that began in early April to demand elections, freedom for jailed activists, foreign humanitarian aid to offset the economic crisis, and autonomy for the opposition-controlled legislature. Maduro accuses the protestors of seeking a violent coup.

However, a rift has developed within CARICOM over the situation there, with five members backing attempts by the bigger members of the OAS to kick the country out of the hemispheric body unless Maduro moves to call the overdue elections.

Dominica, together with Antigua, St Kitts, St Vincent and Suriname were among ten countries that voted against a special meeting to discuss the Venezuela situation, with Trinidad abstaining and Grenada choosing to visit the bathroom in order not to vote.

However, Bahamas, Barbados, Guyana, Jamaica and St Lucia were part of the 19 OAS members that voted in favour of the special meeting. "Dominica is in the unfortunate position that it cannot not align with Maduro. Skerrit cannot make any shift now, he must go with the minority vote – a rather interesting scenario and one that will have implications for Dominica/US relations, and by extension US/OECS," the foreign relations expert told The Sun.

The extent of the split has been highlighted in a recent letter from Ralph Gonsalves, St Vincent's prime minister, to his CARICOM counterparts, in which he complained that wedge was being driven through CARICOM over a plan for "regime change" in Venezuela.

In the three-page letter, a copy of which was obtained by The Sun, Gonsalves complained that the 15-member grouping was allowing "a small group of powerful nations" within OAS to dilute CARICOM's collective strength by dividing the regional states in a bid to overthrow the Venezuela government.

"A handful of powerful countries with an agenda of naked self-interest has strategically invited select CARICOM countries to their meetings and ignored the others. In the result, they have succeeded in disuniting and weakening CARICOM countries whose only strength lies in our solidarity. This worrying development has been particularly manifest in matters relating to Venezuela.

"There is clearly a calculated strategy in place by a group of nations to achieve regime change in Venezuela by using the OAS as a weapon of destruction," he said.

His sentiments were a mirror image of that expressed by Maduro, who has said he would leave the region's oldest grouping, and his harsh language in describing the OAS secretary general Luis Almagro as a "chosen and willing tool" in the plot to topple the Maduro administration is consistent with Skerrit's stated position on Maduro.

According to the expert, who spoke to The Sun on condition of anonymity because he was not authorized to discuss the issue, the letter was nothing more than an attempt by the Vincentian leader to remain in Maduro's good books.

"Ralph's letter is a formability to show the Venezuelans that he is in their corner, confirming his need for their oil. But it amount to nothing," the official said.
It also confirms, he said, that while Venezuela cannot count on CARICOM's support, Maduro can always count on tough rhetoric from Gonsalves and Skerrit.