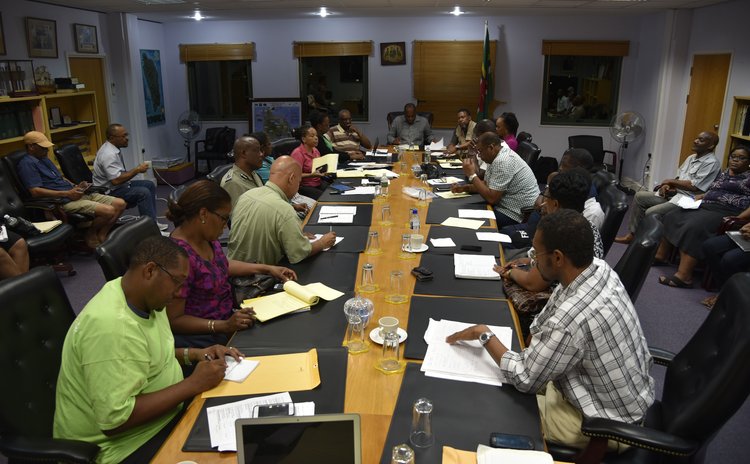 In an address to the nation on radio and television tonight PM Skerrit said the number of deaths caused by Tropical Storm Erika on Thursday morning has been confirmed.

PM Skerrit said the search will continue until "contact is made with every community and a full account is given of every single missing person."

"This is heart wrenching!" he said. "My heart and soul grieve for you."

After a rapid and personal assessment of the damage caused by the storm to Dominica's villages and communities, Skerrit said the devastation is almost beyond belief.

"The extent of the devastation is monumental. It is far worse than expected. It is true that many communities like Petite Savanne, Delices and Coulibistrie have been swamped and are still cut off from the rest of Dominica, but nearly every community has been hit," he said. "There is extensive damage across our small island after floods swamped villages, destroyed homes and wiped out roads. Some communities are no longer recognizable.

"Relevant agencies, both local and foreign, are in the process of doing their assessments and I do not wish to pre-empt their reports, but from what I can see, hundreds of homes around the country have been destroyed, or rendered unsafe to occupy.

"As I moved around today there is evidence of widespread damage to highways, complete bridges have washed away, motorized access to several communities has been considerably reduced and in some instances has vanished altogether. We have, in essence, to rebuild Dominica!

Skerrit pledged that the country will be rebuilt "in honor of those who lost their lives in this particular tragedy."

What is the cost of repairing the damage? Skerrit said he will "not attempt tonight to affix a dollar value, but it is substantial"

"The visual damage I saw today, I fear, may have set our development process back by 20 years," he said.

The Prime Minister then asked local, regional and international agencies to help rebuild the ravaged island.

"I also want to make a national appeal to member nations of the OECS and CARICOM, friends of Dominica across the world, as well as regional and international donor agencies to help in whatever way they can," said Skerrit.

The Prime Minister said all Dominicans, including the opposition must come together in that time of crisis.

"We need at this time to show love; to show compassion, to show genuine interest in the welfare and wellbeing of those in mourning," he said.

"This is a period of national tragedy and I want for Dominicans on this occasion to put all other considerations aside and reach out to each other as brothers and sisters in Christ.

Skerrit added: "I therefore want your assistance in making the national response to this disaster "A New Beginning for Dominica", to pull the nation out of the sluggish recession that started in 2008Let us consider this disaster as a test of our ability to respond collectively, patriotically and imaginatively to the peculiar challenges of Globalization and Climate Change that have been intensifying since the start of the 21st century.

"Let us treat the devastation of Tropical Storm Erika as a wake-up call to do things differently."

Skerrit announced that he had formed a "national reconstruction advisory committee" made up of all parliamentarians, from the opposition and the government.

"Accordingly, I have invited all 21 elected parliamentarians to attend a special meeting of the Cabinet of Ministers tomorrow morning at 8 o'clock at Cabinet room in the Financial Centre Building," Skerrit said.

"The voters of Dominica elected 21 persons to represent their best interests and it is those 21 individuals who shall form the national reconstruction advisory committee.

"Tomorrow, I want us to sit as patriots to draw up a strategy for relieving immediate suffering, rebuilding our homes and infrastructure, diversifying our economy, and generating the wealth to improve the standard of living and quality of life of our people. Dominicans we can do this!"