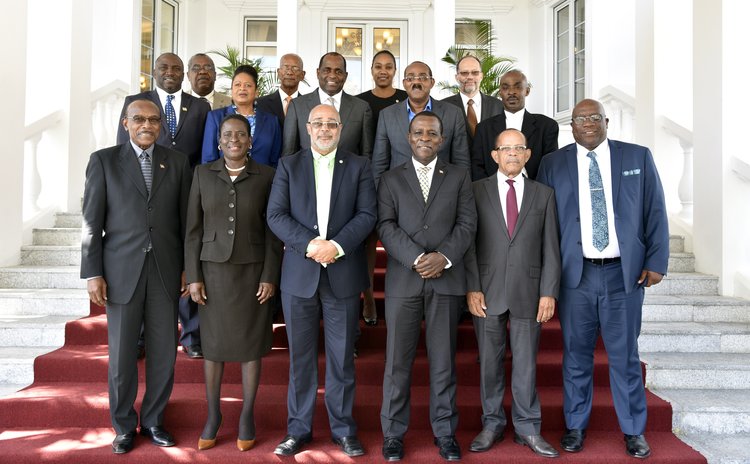 Roseau, Dominica, 18 November 2015- With nine multi-coloured flags of the countries of the Organisation of Eastern Caribbean States draped behind him, Dominica's Prime Minister Roosevelt Skerrit proposed a list of issues that his fellow heads of government must focus on, if not at their on-going meeting here today but in future fora.

This morning, at the opening ceremony of their 62nd meeting being held at the Fort Young Hotel, Skerrit said the prime ministers must discuss a regional health insurance scheme because the cost of health care was a burden on the economies of the individual states.

He said controlling non-communicable diseases such as diabetes and hypertension "has major implications for our economy" and that many citizens were being driven to poverty because "they are finding it difficult to control health care."

According to Prime Minister Skerrit the OECS must also zero in on educational reform to make the school curriculum more relevant to the challenges facing the region.

Skerrit also wants his colleagues to explore ways to finance the Eastern Caribbean Supreme Court using the formula adopted by the Caribbean Court of Justice (CCJ). In theory, at least, the CCJ has built a level of independence from political interference by ensuring its own financial viability.

Additionally, Skerrit wants the OECS heads to strengthen the regional security system through the sharing of information and intelligence.

"Our region is too porous," he said.

At the beginning of his welcome address, Skerrit reiterated his abhorrence for the massacre by ISIS of more than 100 civilians in Paris a few days ago. Skerrit suggested that the terrorist attack may have implications for the region in areas of travel, trade and grants from Europe because the Europeans will be diverting their resources to the fight against terrorism.

Earlier in his speech at the opening ceremony, Didacus Jules, the OECS Director General alluded to the impact that global events are having on the OECS.

"We meet today when extremes are becoming the new norm," said Dr. Jules adding that the principles of the Revised Treaty of Basseterre, signed by the OECS heads of government in 2010, are even more relevant today.

"Our world today is a more volatile and unstable place and war is no longer a contest of aggression between states but a spreading conflagration of hate targeting the innocent," Dr. Jules said.

The OECS heads of government may have a first-hand view of the effects of terrorism on French security when they visit that country soon. Prime Minister Skerrit said the OECS prime ministers will be attending the United Nations Climate Change Conference from November 30 -December 11, 2015 and that almost every CARICOM country will attend "to make a strong case for our countries."

During the two-day conference in Roseau the OECS heads are to discuss: an application by the French Caribbean territories for membership in the OECS; a strategy for Dominica's recovery after Tropical Storm Erika; free movement of people of the OECS and matters related to the OECS assembly.

In addition to these discussions, the OECS heads of government who are attending the conference were expected to visit the Petite Savanne disaster area on Thursday. A town hall meeting at the Grand Bay Secondary School scheduled for 5.00 pm on Thursday has been cancelled.