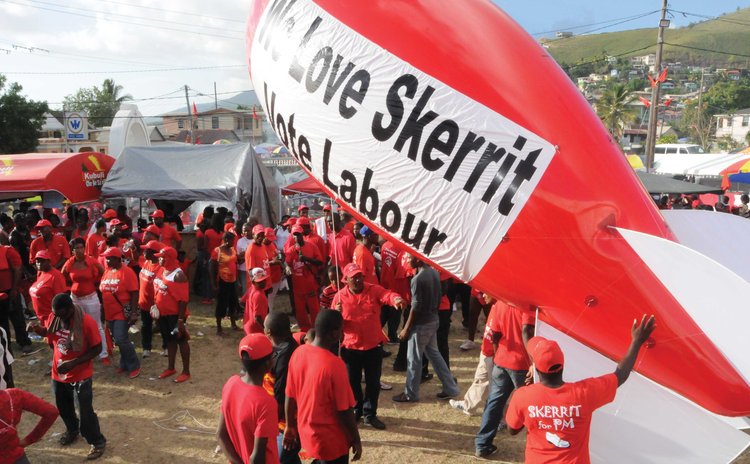 It's an issue that has been raised in the past.

Six years later, having cemented his position as a near untouchable leader, the ceaseless adulation, hero-like admiration and deity-level adoration that he receives has brought the issue full circle.

"For many of his supporters, there is the strong belief that he was sent by God to save Dominica after the untimely demise of the prime ministers, Rosie Douglas and Pierre Charles," said a long-standing Dominica Labour Party (DLP) operative who fell out with Skerrit.

According to the person, who spoke to The Sun on condition of anonymity because of the position he holds, Skerrit and his handlers have done an excellent job exploiting for political purposes, his supporters worship of him.

The source also said Skerrit's ability to skillfully mobilise aid, particularly from China and Venezuela, has added to the God-like worship, and has all but rewritten the history of the relationship between Dominica and countries like Cuba and Venezuela.

"The Cuban/ Venezuelan cooperation did not start with him. It was Rosie Douglas, Pierre Charles, Ron Green and Bernard Wiltshire plus others who laid that foundation for that cooperation," the DLP outcast said.

Some observers say there is a deliberate attempt by the prime minister and his handlers to position Skerrit as the beginning and end of everything; similar to former socialist leaders Fidel Castro and Hugo Chavez.

One person pointed to repeated praise showered on the prime minister by members of his cabinet, even when they address their own ministries' successes.

It is the sort of "God syndrome" brought about by the many risks Skerrit has taken and that have yielded results in the eyes of the public, the former DLP operative said.

However, he warns of a different reality of the polarization in Dominica, which means that there is virtually a fifty-fifty split in the perception of a God-like figure.

"His propaganda machine is quite effective in portraying him as this great benevolent leader. It is not in their interest to come to terms with his many faults, his fiascos overseas, and his falling credibility internationally. What is paramount for them is to keep the people in Dominica bamboozled, unenlightened, and well fed with a lot of propaganda."

It's a sentiment shared by perennial Skerrit critic, the former minister of agriculture Athie Martin, who sees Skerrit worship as a manifestation of the need by a poverty-stricken country for some sort of saviour.

It also shows how well the prime minister has exploited the poor for his political ends, Martin believes.

"He knows he is in a community that is getting poorer, instead of getting jobs going, people will wait for a saviour. So the personification of Bondieu for them in very trying circumstances is a leader who promotes himself as God. I believe he understands that much, so he takes advantage of it for your own personal gain," he charged.

But it also points to another issue, Martin told The Sun, of an alternative reality in the prime minister's mind.

"If you believe that you are something that you are not, then clearly you have departed reality. You believe in your own creation, you believe you are fantasy. Unfortunately, when you have people who think that they are what they are not, then they engage in liaisons about which they know nothing. And what has happened to Dominica through Skerrit is a classic example of a leader reaching over itself, reaching over his neighbours and his own partners in doing his own path, which is not reality at all.

"He believes in his own reality. It also allows him to avoid what he most wishes to avoid, his complete failure in provide leadership and governance to this little island. That is his most abject failure. That is the last piece of reality he will not be able to get away from."

Still, people will "grovel at his feet for benefits he ably dispenses", leading to subservience, lots of adulation and holding him up as if he were God, the critics say.

And for Skerrit, they say, there is no better throne.