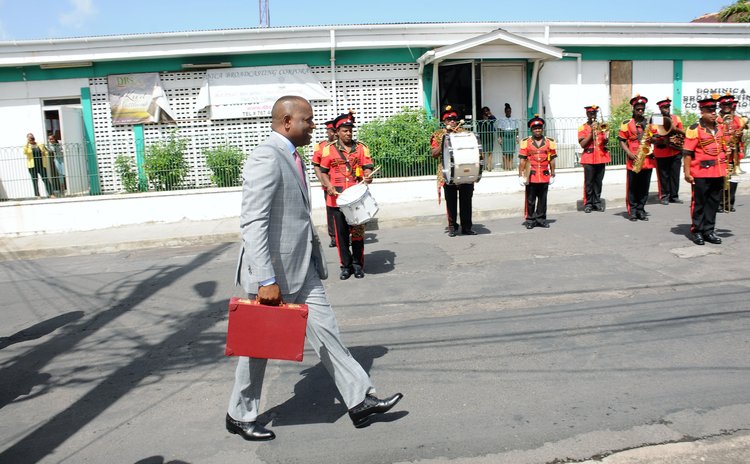 Prime Minister Skerrit, with Government Band in the background, goes to parliament to deliver the 2018/ 2019 national budget

Government presents its budget for the Fiscal Year 1 July 2019 to 30 June 2020. But analysts ask, where is the revenue side of the budget and where will the money come from

It was the most mirthless of laughs and the most palpable air of incredulity that betrayed Athie Martin's perplexity about the "act to provide for the services of the Commonwealth of Dominica" for the fiscal year ending 30 June 2020, otherwise called the 2019/2020 Appropriation Act 2019.

The lack of real amusement and the wry expression of irony suggested a one-word question was forming from the deepest recesses of his mind. Really? REALLY?

Then he asked: "Is that real or imagined?"

It was Martin's question about the budget estimates made available to the media last week ahead of today's presentation by the Prime Minister, Roosevelt Skerrit.

"That's not a real budget," he blurted.

Martin's concern was that the projected expenditure was made available without the income projections.

"My curiosity is aroused by the revenue. I'm anxious to see where the revenue will come from. You don't have Ross [University] anymore, agriculture has been decimated, manufacturing is [non-existent] . . . tell us where you're going to get the money," he stressed.

"Isn't it almost irresponsible not to say to people 'here's what we intend to spend' and to make clear this is where we plan to get the income? Are you telling me what you're looking at is a budget?"

While it is still the largest recipient of the capital budget by a country mile, the ministry of public works, water resources and ports is getting less money this year ($167.7 million) than the $188 million it had been allocated last year. The ministry of housing and lands with $77 million, the ministry of trade, energy and employment ($54.7 million) and the ministry of the environment ($44 million) are among the other major recipients. Tourism and culture is being allocated just $9.7 million, less than the $10.6 that goes to the ministry of ecclesiastical affairs, family and gender affairs. As was the case last year when it was assigned $176.7 million of the recurrent expenditure budget, the ministry of finance will again have the largest slice, but at a slightly lower $172 million. As expected, the election budget almost doubled this year, from $1.742, 975 in the 2018/19 fiscal package, to $3,256,307 this year.

None of this is of much interest to Martin, who suggested that without the accompanying estimates of revenue ahead of today's presentation, the document is little more than embarrassingly infantile attempt at hide and seek.

"It seems like somebody is trying to hide something," he told The Sun. "You're almost a full month into the fiscal year and there is such a gap. It doesn't sound like a document which can trigger debate. What are you going to debate if you can't see both sides of the ledger? Is he saying you'll have to wait until after his budget address? A budget is revenue and expenditure. It appears there's no plan for a debate."

The opposition sympathiser said he wanted evidence of where the money will come from to fund the record-breaking levels of expenditure, while insisting there were no signs of revenue from the controversial citizenship by investment (CBI) programme.

According to Martin, while government makes much of the CBI, the money isn't circulating in the economy and the latest report by the National Bank of Dominica suggests the CBI funds are not being held there either.

These are questions to which answers remain tantalisingly out of reach of a bewildered Martin.