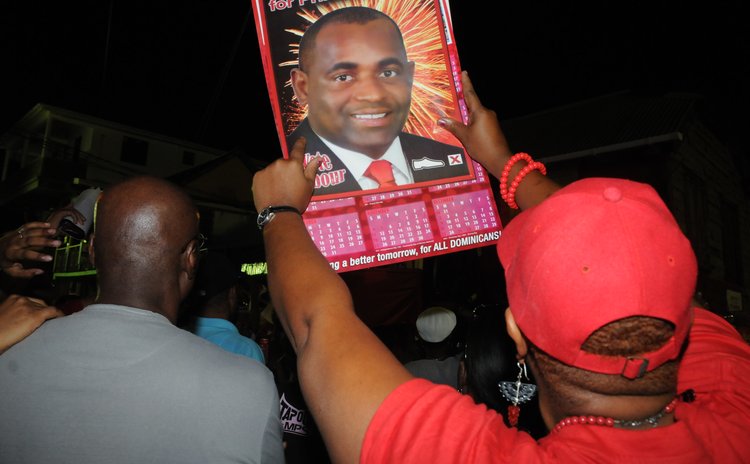 Asupporter holds up a poster of Skerrit at a party rally

"The government's achievements over the first half [of the current term] have been significant, in particular the complete reconstruction of Dominica after Tropical Storm Erika."

The words of Tony Astaphan, the unabashed, unapologetic, unrepentant defender of Prime Minister Roosevelt Skerrit and his Dominica Labour Party (DLP) in a mid-term review of the administration's performance.

"We have resettled two villages, we have constructed a new hospital, we are constructing roads and infrastructure and we are able to recover from Tropical Storm Erika almost substantially and fully in the space of a year, a year-and-a-half. If that is not miraculous I don't know what is."

Asked to discuss government's achievement and failures since it won the 2014 general election with a 15-6 majority, Astaphan chose to focus on the positive, citing steep drops in unemployment and poverty, a manageable debt-to-gross domestic product ratio of 77.8 per cent as at the end of the last financial year and strong capital investment in infrastructure.

"The assessment of the government's management of the finances of the state has been nothing short of excellent," he told The Sun.

However, questions remain about a sudden splurge by Skerrit, with funds not accounted for in the budget being thrown at virtually anyone – critics say DLP supporters – who can paste together a project.

"They are fixing roads, projects all over the place, every community getting grant money for projects . . . it is clear what Dominica is going through right now is something else."

All of these funds come from the controversial Citizens by Investment (CBI) programme, according to the prime minister, who recently went on a public relations blitz in defence of the under-fire programme, which, according to an independent observer, the administration has been successful in expanding, helping to increase revenue.

"The revenue from CBI did help immensely with post-Erika reconstruction," the observer, who requested anonymity because of the position he holds, told The Sun.

According this observer, Skerrit's attempt at bipartisanship immediately following TS Erika should also be applauded, although it was short-lived.

However, he said there were many failures, including government's handling of the Salisbury protest, its failure to generate "not even one megawatt" of sustainable energy, a decline in agriculture, especially of capacities for exports and a lack of any visible signs of foreign policy progress, particularly Dominica's relationship with France.

But it is Dominica's international reputation "as a rogue state dispensing diplomatic passports and appointments to questionable foreigners, including criminal elements, as its diplomatic representatives abroad" that most worries this official.

"As CBS 60 Minutes underscored, the Dominica government has a high reputation for appointing 'dodgy' diplomats, and steadfastly continues to refuse calls for accountability as regards the appointments of foreigners as diplomatic representatives."

It is an issue that continues to dog the administration despite its many attempts to make it clear that its hands are clean in this matter; and an issue that gained fuel with the recent arrests of Iranian Alireza Monfared and former Nigerian oil minister Diezani Alison-Madueke.

However, Astaphan sees the question of government having to shake off CBI concerns as nothing but "a joke", insisting that it is "an absolute, unambiguous, indisputable, objective fact" that due diligence was done on both these people by agencies "with the expertise to conduct the due diligence" and nothing suspicious was found, and that there was no evidence to support allegations that diplomatic passports were being sold.

"I don't understand why anybody could have expected to have foreseen facts that the due diligence agencies were unable to see or foresee. So I don't know how we can have difficulty shaking off issues in the minds of objective people when no evidence is being presented. These issues are being circulated by the United Workers Party and are being believed by those who want to believe it because they are anti-Skerrit or anti-Labour."

The Alison-Madueke explanation in particular, is puzzling, since the British government began investigating her in 2013 for suspected bribery and money laundering. There was also widespread global coverage of her indictment by her own house of representatives for "billions of dollars" in oil money that had gone missing when she was petroleum resources minister, information a simple Google search would have revealed.

This notwithstanding, Astaphan is pleased that much has been achieved so far this term; enough to boast about.