Skull in the grass

An unburied human skull discovered at the Roseau Public Cemetery reminds Dominicans of the poor management of the island's cemeteries. 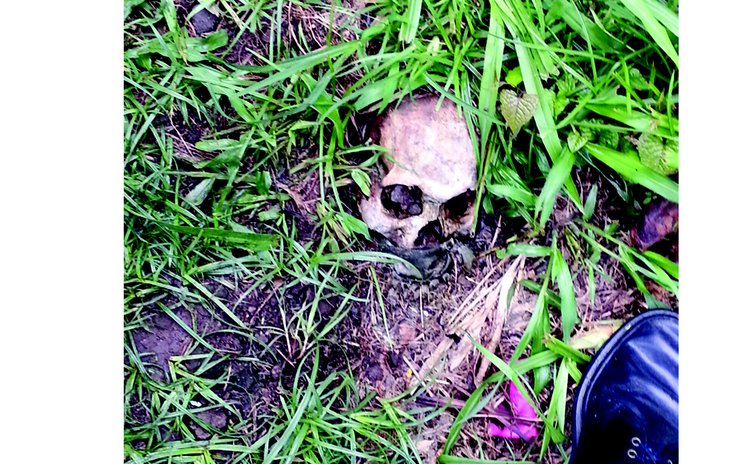 Skull in the grass at the Roseau Public Cemetery

Officials of the Roseau City Council are not saying much about the recent discovery of an unburied human skull among bushes at the Roseau public cemetery. The council is responsible for the maintenance of that cemetery in Roseau that is located near the southern gates of the Botanic Gardens.

Recently, a resident of Roseau discovered the skull while attending a funeral at the cemetery.

The person said he was frightened to come across a human skull which was supposed to have been buried.

He took a photograph of the skull, brought it to the attention of a reporter at the Sun newspaper who went to the Roseau City Council to enquire about the procedures and measures used when digging graves.

In response, Town Clerk Angus Benjamin said that he was not aware of the matter.

"This has not been brought to our attention. I know nothing about this. Furthermore, I was on vacation, I am just returning to work so I can't speak on that," he said.

He said that he was going to a meeting and would attempt to speak to the Sun's reporter later.

"Give me your number, I will call you as soon as I am not busy," Benjamin said.

The reporter again went to his office but he was not very accommodating.

"I am busy with work and I have deadlines, doing wages etc. I have your number I will call you."

Pressed for explanation of the discovery, he said: "I can tell you no comments, but I will call you."

The Sun also went to the Environmental division to get further explanation. Senior environmental officer Sylvester St, Ville said that there was no reasons, health wise, to be concerned.

"Very few diseases are transmitted by dead bodies because organisms is humans that carry diseases requires a temperature of 25-45 degrees to survive," he said.

However, he added, because of religious and cultural beliefs, some people will be concerned about the discovery of the skull.

"No need to be concerned health wise if it was found in the cemetery...if it was found outside of the cemetery that is a different story. But it must be stressed, that burial grounds should a certain high standard of sanitation, human remains should always remain properly covered," he said.

In early 2014 the Sun reported that the Department of Environmental Health (DEH) was concerned about the management of many cemeteries around the island including the main Catholic Cemetery in Roseau.

For instance, the DEH has closed the Massacre cemetery because gravediggers were inadvertently digging up partly decomposed bodies to bury new ones.

Environmental Health officials confirmed to the Sun that they had written to the Ministry of Community Development asking that the cemetery at Massacre to be closed in the best interest of public health. That cemetery is the burial ground for Catholics in Mahaut, Canefield, Massacre and surroundings areas and according to environmental health officials the use of that burial ground over the years has been "poorly managed" posing a serious health hazard to persons in that community.

Meantime, environmental health officials who a few years ago expressed concern about the usage and management of the Pointe Michel Roman Catholic Cemetery now say they are satisfied with its management.