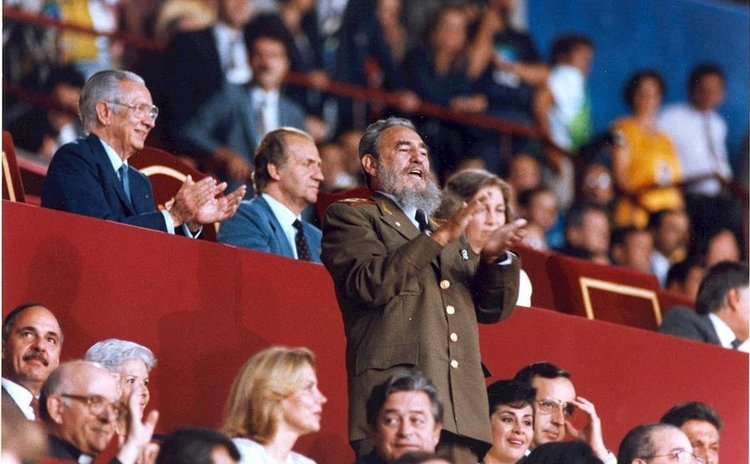 File photo taken on July 25, 1992 shows Fidel Castro applausing to the Cuban Delegation during the opening ceremony of the Olympic Games in Barcelona, Spain

HAVANA, Nov. 26 (Xinhua) -- Aged 90, Cuba's revolutionary leader Fidel Castro passed away late on Friday night. His sudden death comes as such a shock to Cubans, like a thunder at midnight.

"With deep sorrow I report to the Cuban people that our beloved leader Fidel Castro passed away at 10:29 pm on Friday," said Cuban leader Raul Castro, Fidel's younger brother, on state television.

Fidel's body will be cremated in the early hours on Saturday, according to his own wish, and an organizing commission in charge of funeral affairs will provide details on paying homage to the founding father of the Cuban Revolution, said Raul Castro in a statement also broadcast by Radio Reloj.

The announcement came at the late hours of Friday and spread quickly and quietly, catching Cuban people by surprise.

Claudia, who was walking in the street with her friend when the shock came in, found herself at a loss, saying that she'd rather wait till daytime to see how it is going on.

To David Martinez, 19, Fidel has always been a father figure. He was with friends at the renowned Avenue of the Presidents in central Havana when he heard the news. He said he heard it from a policeman, who asked him and his friends to tune down the music as a gesture of respect.

"This is shocking news. Although Fidel is 90 years old, and it is a cycle of nature, it still comes as a surprise to everyone," he said, "There would have been nothing that we have now without him."

The music school graduate who now teaches cello at the Conservatorio Guillermo Tomas, said "I am sure there would be events as the day comes, and prayers too for the revolutionary leader."

Even the night mourned the historic leader of the Cuban Revolution. Once the news spread through Havana on Friday, many Cubans returned home and the streets looked emptier than usual. Nightclubs closed their doors in respect of Castro.

Juan Rodriguez, a young Cuban, said "(Fidel) was the biggest person for Cubans. He was man that always took care of Cubans, protected them and always thought about Cuba."

"May he rest in peace and Cuba could move forward and we'll continue to fight for this country," said Yoslan Fuentes.

On the way to the landmark Revolution Square, people were seen at bus stops, talking about the news.

Foreign media in Cuba were told that local embassies will provide fast service for media visa to their colleagues who are coming to cover Fidel Castro's death.

Only a few days ago, Fidel Castro met with Vietnam's president who visited the island country, with images showing him in healthy and lucid condition.

Now, the city starts to awaken little by little, and everyone is aware that difficult hours and sad days of confusion, suffering, are coming.

Early in the morning, in an official statement published by the Communist Party newspaper Granma, the organizing committee on Castro's funeral affairs, said his ashes will be interred there on Dec. 4 after Cubans from all over the island pay their tributes to the leading figure of the Revolution.

On the following day, Castro's ashes will begin their journey along the route that commemorates his victory in 1959. The journey will end in Santiago de Cuba on Dec. 3, where there will also be a mass rally. The burial ceremony will take place at 7 a.m. the next day.

The Cuban State Council has also declared nine days of national mourning starting at 6 a.m. Saturday and ending at noon time on Dec. 4.

During the mourning period, all cultural shows will be suspended and the flag will fly at half-mast in public buildings and military establishments.