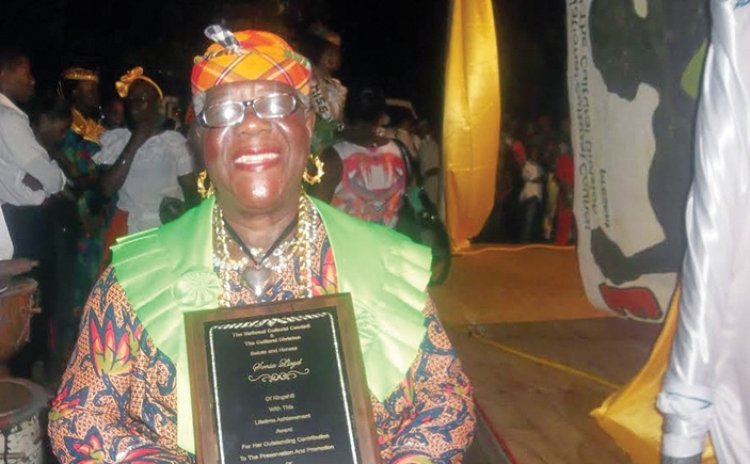 Sonia Llyod shows off her award

The National Cultural Council and the Cultural Division have recognized Ahmed Jno. Baptiste, Sonia Lloyd and the Possie Pan Cultural Group for the work they have done in preserving and promoting Dominica's culture.

These deserving individuals received the awards at Cultural Gala held on November 3, 2014 at the Botanic Gardens.

Traditionally, the Cultural Gala is the last event of the independence celebrations.

Ahmed Jno. Baptiste of Capuchin, born into a cultural family and who resides in Capuchin, received the 2014 Young Artist Award for his consistent contribution to the independence celebrations in the field of dance.

Ahmed made his first appearance at age three on the cultural stage by performing the Bélé. From there he joined the junior section of the Capuchin Cultural Group. Ahmed has now moved on to the adult group where he has mastered at all the traditional dances. Taking his cultural talents even further, he learned to play the "gwage" which he periodically performs with the Jing Ping Band.

Cultural music icon, Sonia Lloyd received the Cultural Lifetime Achievement Award for her contribution to the preservation and promotion of Dominica's folk music and language.

Lloyd has been involved in culture from the 1960's; she made her debut in the National Day Creole Song category. In 1999 the Division of Culture funded the production of a compact disc with a number of Llyod's songs from the National Creole Song competitions. In 1999 she received a special recognition award from the National Cultural Council for her contribution to cultural development in the field of folk music. In 2004, she was the recipient of the prestigious Golden Drum Award for her contribution to culture in Dominica.

Finally, the E.O Leblanc Award went to the Possie Pan Cultural Group for the preservation and promotion of steel pan music and the traditional arts in Dominica.

The group is led by Emelda Aaron. In 2003, the Division of Culture provided Emelda and her group with a set of steel pans and technical assistance in the person of Edward Andre (deceased) who for many years operated as the group's trainer, tutor and arranger.

The group made its debut in 2003; in 2004 Miss Emelda Aaron assumed the position of group leader and since then has led with efficiency and dedication. In 2007 the National Bank of Dominica (NBD) recognizing the effectiveness of the group agreed to sponsor the project; the bank upgraded the instruments and ensured ongoing technical assistance for the group.

In 2009, in an effort to offer more wholesome activity to the Portsmouth youth, NBD Possie Culture Pan broadened their skills to introduce a traditional band, the Jing Ping Component; since then the group has participated in the National Day competitions in both the adult and children categories.