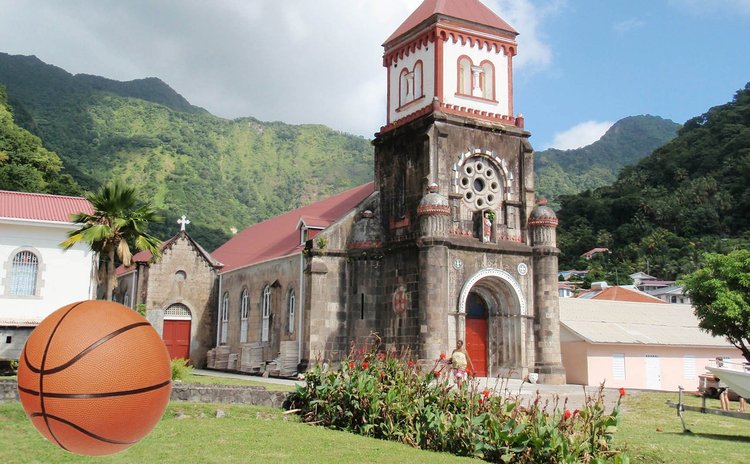 Soufriere (known in Kwéyòl as 'Soufouyè') and Scott's Head ('Kachakou') are two of the three villages in the Parish of St. Mark in southern Dominica, where the Kwéyòl Language is widely spoken. Further, both are fishing communities and bound with the Soufriere-Scott's Head Marine Reserve.

One village boasts popular geologic manifestations such as hot springs, fumaroles, etc, while the other offers some spectacular scenery from the Peninsula where one is able to capture, simultaneously, breathtaking views of expansive coral reefs, the calm waters of the Caribbean Sea and the rumbling waves of the Atlantic Ocean with a camera.

In August 2017 André Charles from Soufriere approached Jump Ball's columnist about producing an article on basketball in the twin villages of Soufriere-Scott's Head, to coincide with Heritage Day 2017 which was carded for that community later that year.

The columnist acceded to the request and met with André on that bright, sunny, Sunday 16th September 2017, the day before Category 5 Hurricane Maria struck Soufriere, Scott's Head and the rest of Dominica. Consequently, Heritage Day 2017, like many other activities, never materialized due to the ravages of Maria.

André, a retired basketball player and referee, considers himself to be one of the pioneers of the game in Soufriere-Scott's Head. He also credits other persons such as Festus Dalrymple (himself a former basketballer), Bevin Lewis and others for igniting the basketball flames in these communities. However, local newspapers dating back to the early 1980s provided invaluable information on local basketball, and these will be heavily referenced in this article. . The Parish of St. Mark, which comprises Soufriere, Scott's Head and Galleon, is actively involved in multiple outdoor sports, viz. cricket, football, rounders and basketball. However, among these communities, only Galleon has not participated in the national basketball league to date, and this article will focus on the Soufriere-Scott's Head area and their involvement in basketball.

The national basketball league has been included on Dominica's sports calendar for more than half a century now, more specifically from 1966, and the Soufriere-Scott's Head area has been involved in the sport for over three decades now, though not continuously. Furthermore, like Grand Bay and Pichelin, the twin-villages stand proudly as one of three basketball 'centres' in southern Dominica.

The roll for those flag-bearing teams reads: Bengals, Bulldogs, Champs, Clippers, Cowboys (I, II), Flash, Keep Fitters, Pops, Razorbacks, Running Rebels, Sharks (I, II) and Venoms (I, II) and they will be presented below in the order of their participation in the DABA League. However, let us bounce off with the area's first basketball competition.

That League, which was organized by the Keep Fit Club which hailed from Soufriere, tipped-off three months after the completion and official opening of a hard court in Soufriere. As reported in The New Chronicle of 12th March 1983, the facility was to "accommodate the playing of basketball, netball and volleyball," and there was the "possibility of including lawn tennis whenever possible."

The court cost over (EC) $7,500 worth in materials and became a reality through the initiative and hard work of the members of the Keep Fit Club. Present for the official opening of the facility, which was constructed within the ruins of the L. Rose & Co. Lime factory, were Minister for Education, Health, Youth Affairs, Sports & Culture, Senator Charles Maynard and Home Affairs Minister Hon. Brian Alleyne. Thereafter, unofficially players named that court "The House of Pain!"

Rebels stamped their supremacy in that league in grand style! After winning the Ball-o-Rama by defeating Leopards in the final, they proceeded to make a clean sweep of the two other championships at stake. They became the first KFCBL League Champions with a 52-42 triumph over Leopards, and later captured the Knockout trophy with a 44-37 victory, also over Leopards.

At least six (6) Blow-Outs were meted out to opponents in that League competition. Rebels completely pulverized School Gems by 103 Pts, with a score of 120 Pts to 17. They also blew out Fires 57-22. Continues next edition