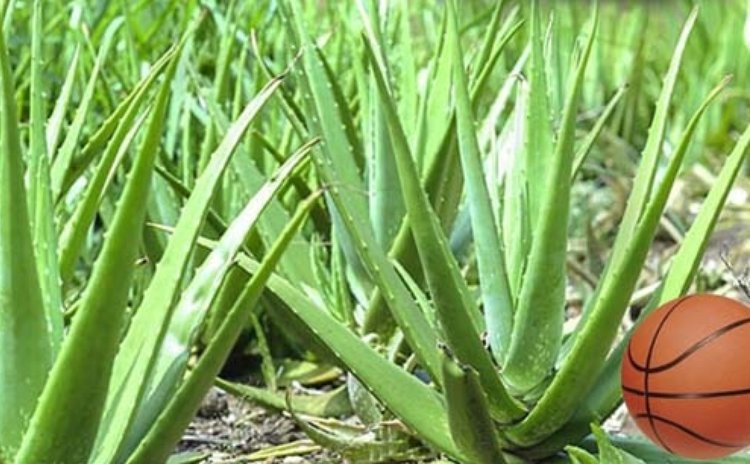 Aloes, an economic crop in the Soufriere Valley in the 1980s

Part II of the article presented the conclusion of the write-up on the Keep Fit Club Basketball League and began presenting the 14 teams from the Soufriere-Scott's Head area that participated in the national basketball league. The article continues below:

Soufriere & Scott's Head Teams In National League (Ctd): Year of Environment & Shelter 1989 saw only one team from the SSHA, BENGALS, participating in "the DABA" and playing in Division III. Bengals in their only season, placed 3rd in the League from eight teams, with 2 wins, 3 Losses, scored 367 points and conceded 292. They also placed 4th in Free-Throws, converting 43 from 113 attempts. Their J. Lewis was the 7th highest aggregate-scorer, with 75 points.

The following year, 1990, another team from the SSHA debuted in the national league. This one was P.H. Williams BULLDOGS and they competed in Division II (Intermediates). And, like predecessors Keep Fitters, Pops and Bengals, they only survived a single season.

No team from the area participated in the DABA League in 1991, the 100th Anniversary of the invention of the game of Basketball.

However, come 1992, two teams from the SSHA stepped out onto DABA's court. Baron's Enterprises RAZORBACKS and Mansion House BUCKS were the SSHA teams on DABA's 1992 Divisions II and III rosters respectively.

Come 1993 there was no more Bucks, but Razorbacks continued to represent the SSHA in Division II, for their second and final season.

1994 was the beginning of a new chapter in the history of SSHA basketball. That year Wadicolé COWBOYZ made their entry into the national league, in the Intermediate Division. From available records, while they twice lost closely to Flames in Overtime (84-88, then 77-79), they enjoyed victories over Hoyas (52-46), X-Men (68-57), won by default against Cusport, and blew out Atkinson Cats 97-60.

That year, Cowboyz' Owusu Dangleben was voted Most Promising Player for 1994 by the Dominica Amateur Basketball Association. Other high-scorers for Cowboyz in their inaugural year included Dale Mitchel, James Douglas and Carlton Smith, among others.

It should be noted that in their first year, Cowboyz participated in the only DABA Clash-of-Champions Tournament to date. Unfortunately, they were knocked out by Oilers of Castle Bruce in one of the semi-final encounters.

In 1995, for the first time teams from Soufriere and Scott's Head participated in the national league, and both did the SSHA proud. We saw the entry of Dennis Labassiere RUNNING REBELS from Scott's Head join neighbours Nature Island Dive Cowboyz from Soufriere, in Intermediates. That year, Cowboyz emerged Division II League Champions while Running Rebels copped the Division II Knock-out Championship.

In 1996 Cowboyz were promoted to Seniors while Running Rebels continued in Intermediates.

Come 1997 the SSHA continued to be represented by two teams: Cowboyz in Premier with VENOMS competing in the 2nd level division.

That year the SSHA teams enjoyed a fair measure of success. Although Cowboyz lost to Blazers (67-80) and Hoyas (60-67), they registered wins over Pros, Clouds, Knicks, and even the once mighty Cardinals in what was described as a 'surprise win'. Cowboyz' Owusu Dangleben, Umulu Dangleben and Patrick Mason were selected onto a DABA All-Star Team.

Venoms, on the other hand although suffering a loss against Raiders, blew out Pioneers 79-55, and also enjoyed victories over Police and Marigot Sonics among others. That year, their Ewin Destouche secured an athletic scholarship to attend school and play in Canada.

1998 was another important year for Soufriere-Scott's Head Basketball, while the area continued to be represented by two teams: Cowboyz in the Premier Division and Dennis Labassiere Venoms in the 2nd Level Division.

Venoms were quite potent that year, capturing the Division I (2nd Level) League Championship with their Algernon Jervier being adjudged MVP in that Division. Algernon, and cousin Jim Jervier got called up for trials for the 1998 senior national team, with Algernon going on to gain selection on the Dominica National Team for the Windward Islands Basketball Championship which was staged in St. Lucia. Marcel Nicholas and B. Casimir were two of the other high-scorers on Venoms.

Come 1999, for the first time ever we saw three (3) teams from SSHA competing in the national league. Kentucky Fried Chicken (KFC) CHAMPS and Hershey's FLASH, two teams which had participated in the 1998 Soufriere Basketball League, debuted in the DABA league, in the 3rd level division. From available records, Champs suffered blow-outs from Stafford Morancie Eagles (76-131), Wesley Renegades (56-105) and Castle Bruce Oilers 46-92.