Sour-Sour: "Only when I die they will get back that crown" 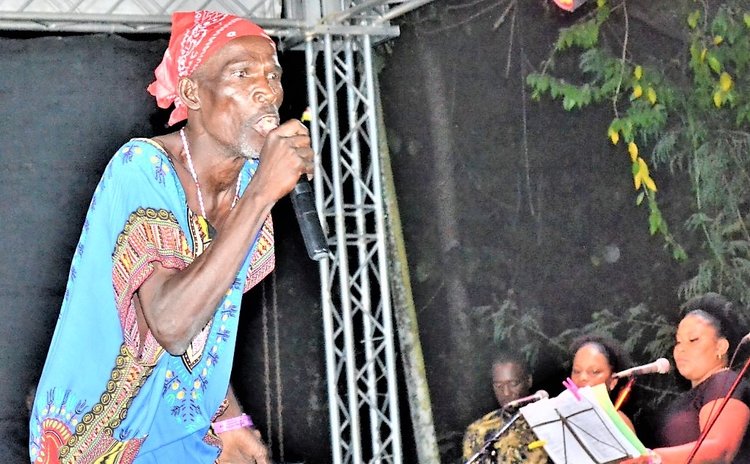 Sour-Sour performs at the Semi-finals in 2021

Popular calypsonian Charles "Sour-Sour" Isaac says he sees no competition from rivals in his pursuit of this year's Virtual Calypso Monarch crown.

"I'm not afraid of no one in this competition because there is none who can triumph over Sour-Sour this time," told THE SUN.

After a 28-year journey in Calypso competitions, the veteran performer has finally made it to the finals succeeding last years' close encounters which eluded him.

Now under new management for the past three years, Sour-Sour stated his team has shaped and molded him into a better calypsonian and he expressed his gratitude.

"I'm going to take the show seriously, no faux pas this year. Bassie my manager have (sic) been helping me a lot so I know I can do it, that is why for the finals I'm coming with my 2020 crown on stage because I know I'm already King. It's only when I die they will get back that crown."

With a song entitled "Hitman" which speaks of being the life of the party, Sour-Sour said despite his idiosyncratic manner and eccentric humour, he should be seen as a threat in the competition and be taken seriously.

"With all my ability and all my heart I am going to win them fellas. I'm feeling good and marvelous and once the good Lord gives me all my health and strength, I will try my best on the night and that crown will be mine," he said.

Given the economic constraint brought about by the Covid-19 pandemic, the Dominica Calypso Association (DCA) has revealed that prizes this year will be downscaled compared to that of previous years to which Sour-Sour conveyed his disappointment.

"The first year I going to win it going to be little money and I vex. I wanted the $20,000," he stated, adding, "This year that is little money that cannot buy me a vehicle or a house or nothing because I had some big plans. So all I can do with the money when I win is to help myself and share it with my manager and some of my fans."

Though he said he is grateful for the support he has been receiving, Sour-Sour also appealed to some of his supporters to be givers rather than takers especially following his self-proclaimed win.

"Everywhere I go some of them want a drink or asking me for money. That's why I had the song last year drink rum and make bomb. Some of them are too greedy and if they take all what Sour- Sour have they will finish him."

The reigning Road March King further fanned claims that had there been such competition this year, he would have undoubtedly regained the title.

"Independently, by far. I would have been Road March King. I not hearing a song that can beat mine so if we had carnival that alone you would hear on the road."

He urged the judges of the Virtual Calypso Monarch final on February 13, to not overlook him as he is "ready for my crown."