Sour- Sour: "When it comes to Calypso I on like onion" 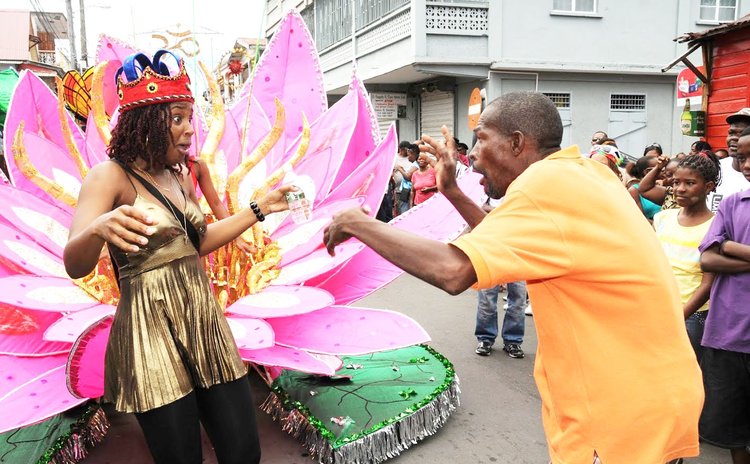 Sour-Sour and Tasha P make faces at each other in the carnival band on Kennedy Avenue, Roseau, in 2011

As the saying goes, the judges' decision is final; but one finalist in this year's Virtual Calypso Monarch competition says he is not satisfied with the result as he believes he was robbed of his crown.

Charles "Sour-Sour" Isaac who was a first-timer at the Calypso finals after a 28-year journey in the Calypso scene, had expressed much confidence to THE SUN in emerging victorious in this year's Calypso competition.

In our last issue, we spoke to the veteran calypsonian who stated, "Only when I die they will get back that crown.'' However, at the just-ended carnival season, Isaac secured the third position in the first-ever virtual Calypso contest held on February 12, and as such, THE SUN followed up with Isaac to find out from him how the crown eluded him yet again.

"My performance was very fabulous and wonderful and the judges made their decision but I'm supposed to be the King. Yes, Bobb had to place but hey yours truly should have been the King," Sour-Sour said.

His disappointment evident, Isaac said he gave "1000 percent" to his performance to not only not disappoint his fans and his team but also himself.

"I really did my best. I came prepared, had no mistakes and the night of the show I gave a stellar performance and everyone wanted more of Sour. So one of the judges didn't want to see Sour-Sour as King," he said.

For the foreseeable future, Isaac says his hit will not only be for the road as compared to previous years but to make it in the two-round competition.

"When the Calypso return to normal business the young youth have to come good. I not discouraging them but they have to come prepared because the songs I will be bringing for both rounds of the show will be to secure my crown," he said.

To veteran calypsonians, he also sent a word of caution.

"I am the real hitman in Dominica. When it comes to Calypso I on like onion, so nothing cannot stop me. They get it this year but next year tell them watch out because S.O.U.R. S.O.U.R is coming back for what belongs to him. My crown," he said.