South Africans celebrate 20 years of freedom with much fanfare 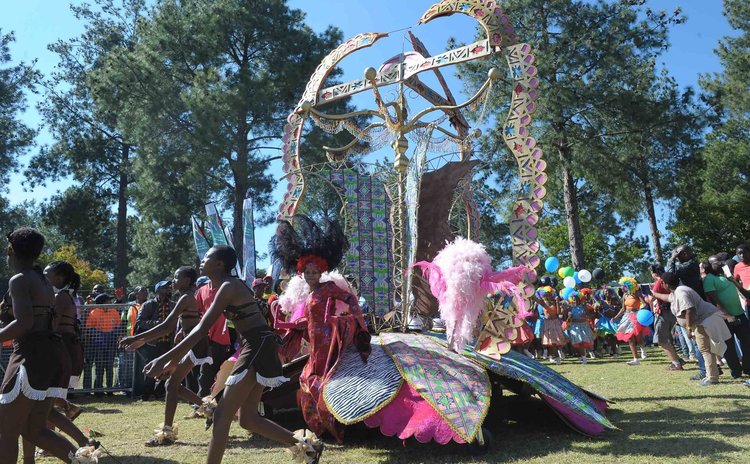 PRETORIA, April 27 (Xinhua/Sun) -- Millions of South Africans gathered across the country on Sunday to celebrate 20 years of freedom under the theme "South Africa – a better place to live in".

At the main celebrations in Pretoria, thousands gathered in front of the Union Buildings to celebrate the event and listen to President Jacob Zuma's speech.

When Zuma arrived, the large crowd greeted him with cheers and ululation. This was followed by a 20-gun salute and aerial displays by the airforce.

Zuma reminded the nation of what the country had gained since 1994.

"Indeed we were free at last! We gained equal citizenship in the land of our birth. Soon thereafter a new Constitution came into being after hard work by South Africans represented by various parties. We gained the rights to life, equality, freedom of movement, speech and association, worker rights, children's rights and women's rights," he told the cheering crowd.

He added that the country's working class that was severely undermined during apartheid, can today look back and smile.

"Today we celebrate the hard-won rights of workers, including workplace organizing, collective bargaining, equal pay for equal work, health and safety, skills development, minimum wages for workers in vulnerable sectors, the right to strike, and the right to peaceful protest."

The president also applauded achievements that have been made in reducing the level of crime in the past 20 years.

"Since 1994, the levels of serious crime and property crime have declined. But we are not complacent. Work continues to build even safer communities. He added that 83 percent of households had access to proper sanitation compared to 50 percent in 1994.

"More progress made is in the area of improving access to justice, especially for those who were previously marginalised. This has been done through the establishment of more police stations and courts as well as through the increased provision of legal aid," Zuma said.

Zuma highlighted that close to three million houses had been built for the poor since the country gained independence. He added that access to water had increased from 60 percent in 1994 to over 95 percent in 2012 while that of electricity moved from 50 percent to the current 86 percent.

He also lauded the great achievements in the health front, saying more than 1,500 new health facilities including clinics have been built while others have been refurbished. Most clinics are now open 24 hours a day and people do not pay to receive health care.

"Our HIV and AIDS programs have yielded dramatic results. There has increased life expectancy and thousands of children have been saved due to improved mother to child HIV transmission prevention program."

Zuma insisted that his government had concrete plans in place to boost the economic growth and improve the social lives of its people.

He however admitted that there was still more to be done for all South Africans to fully enjoy the fruits of democracy.

"We have done a lot in 20 years, but we still have some way to go to eradicate poverty, inequality and unemployment. One of the key achievements of the past five years has been the development of the National Development Plan which has been endorsed by all political parties in parliament.

"The next decade of freedom must be one in which we work together to advance economic transformation. We will continue to work with the business sector to advance broad-based black economic empowerment and affirmative action, in order to change the ownership, control and management of the economy," he said.

The audience reacted positively to Zuma's speech. Sibongile Mahlangu, 28, was among those who celebrated the Freedom Day in Pretoria with song and dance.

"I thank Nelson Mandela and others for bringing us this freedom. Today I can go anywhere and do whatever I want because South Africa is free," said Mahlangu.

Sifiso Ngwane, a university graduate, said getting quality education in a mixed race university is one of those benefits of independence he will never forget.

Pretoria resident, Vengani Netshitalu, father of three, said "During apartheid I lived in a shack without electricity and running water, but now the government has provided me with a house, electricity and clean water."

Nelson Fikeni, 49, who experienced the oppression of blacks during the Apartheid era, said life is now far much better compared to what it was before 1994.

Noluthando Nombembe, a young woman now owning a small boutique in Johannesburg, also counted her gains from freedom. "Black women were nothing during apartheid, but now I have a business and making my own money," she said.

However, many said they expect the government to work hard in dealing with corruption, unemployment and poverty.

"A lot of people are not working and some people in the public service are stealing money meant for the poor through corrupt deals. If the government can stop all this, our country will be more prosperous," said Mkhaliphi, a Johannesburg resident.