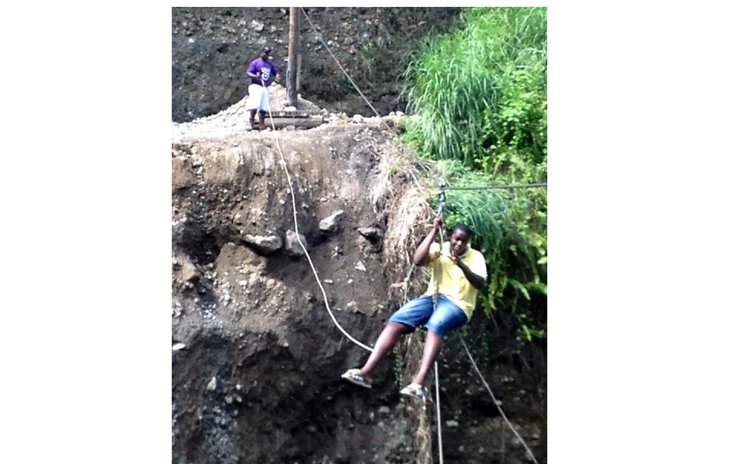 Residents of Delices/Boetica and Victoria/Laroche are complaining about the slow pace at which a bridge over the Boetica gorge is being erected and are urging builders to complete the project before Christmas.

Meanwhile, Public Works Minister Ian Pinard has informed The Sun that the builders have advised him that work on the bridge should be completed before Christmas.

Pinard had said in early November that he expected the bridge to be erected in about four weeks, but by early December residents noted that not much work had been done, as far as they could tell.

The minister told The Sun that although work on the bridge had been delayed because of bad weather, the builders were now "on [track] in terms of having it opened before the Christmas".

"The guys have intensified their work. The contractors fell behind because of the weather and also the site is an extremely dangerous site," Pinard explained.

Recently, Pinard's ministry came under scrutiny from Parliamentary Representative for La Plaine, Petter St Jean because of the apparent leisurely pace of public works in the area.

"On the part of the Ministry of Public Works, there has to be a greater level of seriousness and diligence as far as supervision of projects, and not just Boetica …" St Jean had advised publicly.

"In a crisis situation . . . works of this magnitude being done, the people have been in a situation for such a prolonged period, there has to be recognition on the part of the Ministry that the works must be supervised.

"There has to be a consistent effort on the part of the supervisors to ensure that the work is done, not just in the stipulated time frame, but within the specification that the contractors deliver what it is that we want within the given time frame," St Jean said.

Meanwhile, residents in the area continue to complain about the slow pace of public works there and are doubtful that the bridge can be completed by Christmas.

Since Tropical Storm Erika, residents have been forced to cross the gorge and move supplies via a zipline across the gorge. or make a difficult trek through a bypass to get in and out of the area.

As the residents await the completion of the bridge across the gorge, they note that only four-wheel-drive vehicles can use the bypass at present.

While residents acknowledge that building the bridge is useful, many persons maintain that the main priority should be clearing landslide debris from the Petite Savanne road.

They contend that that clearing the road would give them much shorter and safer access to Boetica/Delices, rather than the current high-risk crossings of the gorge.

One resident, Joseph Eugene, declared that building a bridge across the gorge is a waste of money because clearing the Petite Savanne road would have restored easy access in a shorter time.

However, Minister Pinard pointed out that experts engaged by Government have warned that the Petite Savanne road is too dangerous to be reopened at this time.