Sparrow in Dominica Hall of Fame 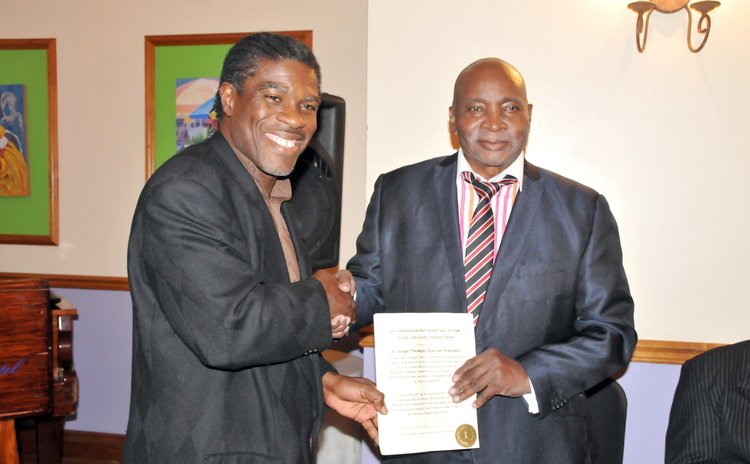 Alex Bruno, left, and Mighty Sparrow during the Hall of Fame ceremony

For their contribution to the development of Calypso five persons were inducted to the Dominica Calypso "Kaiso" Hall of Fame.

The ceremony was held at the Fort Young Hotel on January 29.

"As a citizen of the Caribbean, I am extremely proud that we have produced a gentleman by the name of Mighty Sparrow. I think he is one the most recognized names coming out of the region," said Manager of FLOW Jeffrey Baptiste at the induction ceremony.

He noted that the Hall of Fame ceremony should influence people to begin recognizing people's work.

"I think we to in some way use this evening proceedings to change the course of our conversations, how do we change the mind set of our people to recognize the significant contribution of our trail blazers, the people who continue and will toil and work exceedingly well in their fields."

Chairman of the Dominica Calypso "Kaiso" Hall of Fame Alex Bruno said that the idea of the Hall of Fame came to him while he was working in the administration of Calypso.

"I have been looking at the calypsonians past and present that have been doing so much," he said.
Bruno said that at the administrative level there was little being done to preserve the Calypso art-form including the documentation of songs and the recording of audio and video of the live events.

Meanwhile, Keynote Speaker Officer in Charge of the University of the West Indies Open Campus Kimone Joseph said that this activity for all intent and purposes presented an occasion to give respect where respect is due.

"An induction into a Hall of Fame is an extraordinary moment and those who are privileged called into and those that will be called into it years to come must demonstrate respect for the art form, respect for others and respect for themselves," said Joseph. "By coming together to witness the induction of these five new members into the Hall of Fame and to join those that have been honoured for their own efforts we are certainly saluting the art form for a deeply rooted emblem of our African ancestry with its own literary form and structure."

Joseph added that that occasion provided a sense of gratitude in an era where the trend seems to be to ignore the contributions of those that blazed the trail.

"It is as if in our society these days we exist in an alternate universe…and it seems we only seem concerned with what is new, what is fresh and what is in," she said.