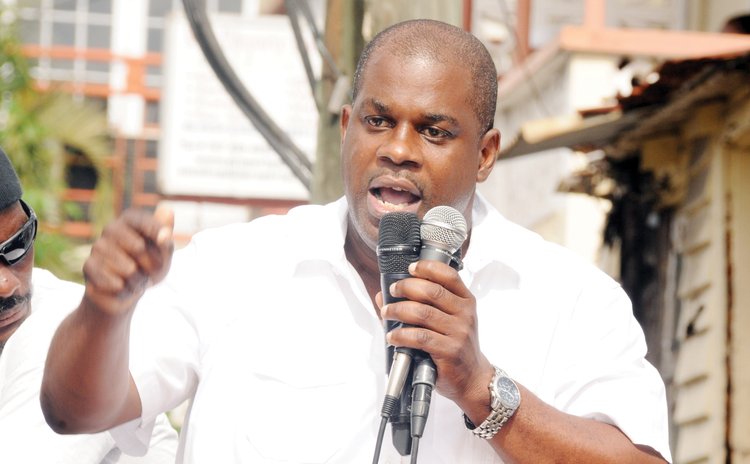 Joseph Isaac speaks at the 7 May 2017 meeting

When the Tenth Parliament met on Monday 10th February 2020 for the first time since the December 6, 2019 general election, Joseph Isaac took his oath as Speaker of the Dominica House of Assembly replacing Alix Boyd-Knights who had sat in that chair from 2000.ear or ill will"

Isaac's deputy, Phillip Role (the 24 year-old grandson of Alix Boyd Knights) and nine senators from the ruling Dominica Labour Party (DLP) and the opposition United Workers Party (UWP) also vowed to serve the nation "without fear or ill will".

"I'll do my best," Isaac told parliament, promising to foster balanced debates in the House.

For the DLP, the following will serve as senators; Cassani Laville, Oscar George, Gregory Riviere, Phillip Role and Nicholas Esprit.

For the opposition UWP, the following senators took the oath of allegiance: Ernie Lawrence Jno Finn, Francisca Joseph, Anette Sanford and Clement Marcellin Jr. His Excellency President Charles Savarin also addressed Parliament at the beginning of the 10th Parliament under the Dominica Constitution. In his address President Savarin declared that the election was "free and fair".

The Parliament, at least the government side of the House of Assembly, also paid glowing tribute to out-going Speaker Boyd-Knights on whom was bestowed the title of "Speaker Emeritus".

"I'm truly overwhelmed," the former Speaker said. "It's so nice to be appreciated."

During the sitting of Parliament, the Government of Prime Minister Roosevelt Skerrit is to introduce Bills to amend the International Business Companies Act; the Income Tax Act; the Offshore Banking Act; the Banking Act; the Money Laundering (Prevention) Act; the Proceeds of Crime Act and a Bill for an Act to amend various laws of Dominica.

Additionally, the Government says it spent about $27 million for the Rapid Response Social Recovery Agency; $10 million to meet payments for students pursuing higher education at universities and colleges; $102 million for dredging rivers in various communities; about $57 million for road maintenance and for the Community Employment and Beautification Programme.

Government also says it spent $481,000 for meeting the cost of medical treatment in Martinique for former Minister of State, Ivor Stephenson.