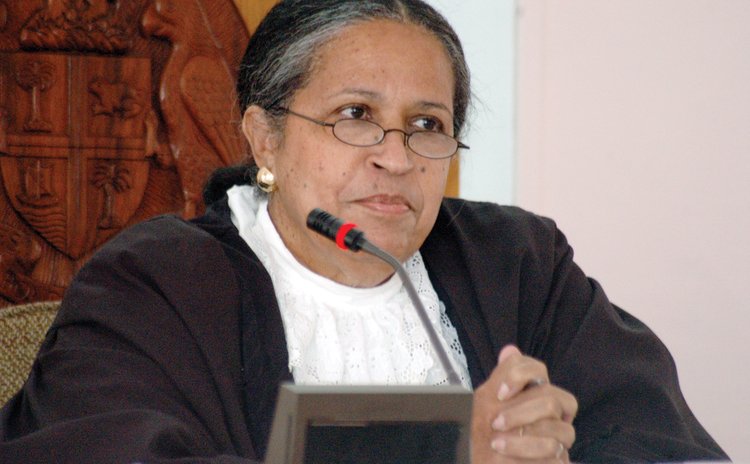 Dominica's Speaker of the House of Assembly, Alix Boyd-Knights

Government gives Alix Boyd-Knights, the three five-year term Speaker of the House of Assembly, an extra-large increase in salary. Compared to salaries of House Speakers in the region, the pay hike appears to be justified but the timing has been questioned.

"That decision should be reversed, in light of the difficulties that we are experiencing in the aftermath of Tropical Storm Erika," said Opposition Leader Lennox Linton.

He added that Government must reconsider that increase to Speaker Boyd-Knights because of "the significant amount of money that we are approaching the world community for and especially the circumstances where the government is indicating a significant decline in its revenue this increase cannot be afforded".

Cabinet Paper #0335/2015 titled "Review of conditions of service of Speaker of the House of Assembly" states that Cabinet approved the increase effective at the commencement of the Ninth Parliament on February 20th, 2015.

"The remunerations granted to the Speaker of the House of Assembly shall be upgraded as follows: (a) Salary EC$6,000 per month; (b) Combined travel EC$1,500 per month," the Cabinet Paper ordered.

In addition, the Cabinet directed the Police Force to provide advise on the development of "adequate private and or police security, to be granted to the Speaker of the House of Assembly." From August 2015, the increase upgraded Boyd-Knight's salary from EC$2,800 to EC$6,000 per month.

Additionally her combined travel and entertainment allowance has increased from $750 to $1,500.

"When she was paid the new remuneration in August, she would have been entitled to back pay for April, May, June and July and part of August and also part of February since it should have taken effect on February 20th, 2015," Linton said. "We are saying that this decision should be reversed and Mrs. Boyd-Knights as Speaker in good conscience should return the back pay that she has received".

Linton added that the proposal for the increase of the Speaker's salary should have been taken to parliament and furthermore the salary review should not have given to Boyd-Knight's only.

Nevertheless, Boyd-Knights' new salary seems to bring the Dominica Speaker of the House salary and allowances at par with similar positions in CARICOM. For example: in Antigua the salary and allowances of the Speaker is EC$5000 plus EC$600 for travel and EC$400 for entertainment. No security is provided except for public functions and when travelling the Speaker uses his personal vehicle.