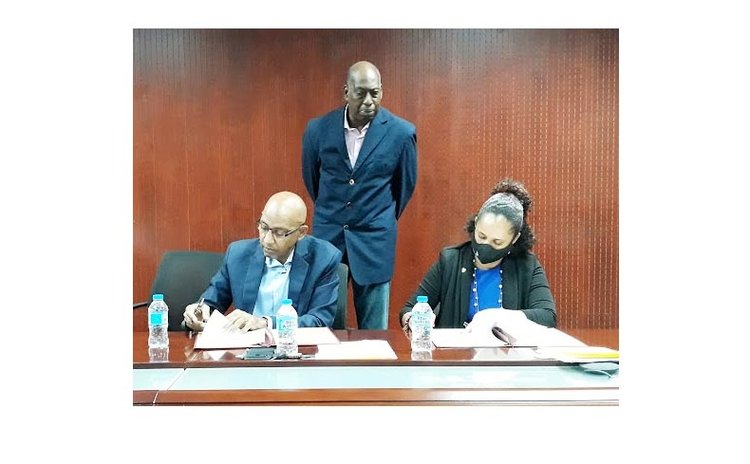 Dominica has made it official.

The World Paediatric Programme has pledged its continued commitment.

Children of Dominica are promised better health care for severe ailments which afflict them.

All this with the signing of a Memorandum of Understanding (MOU) between the Ministry of Health, Wellness and New Health Investment and the World Paediatric Project (WPP) on Saturday 10th July.

The World Paediatric Project is a United States-based non-profit organization whose mission is to provide children from developing countries with access to advanced diagnostic and surgical paediatric specialty care.

The institution has been providing services to the region since 2002 and began assisting Dominica in 2008. As of November 2020, 311 children have received much-needed medical treatments by WPP valued in excess of EC $30,000,965.00.

Chief Executive Officer of the Dominica China Friendship Hospital, Dr. Dexter James says "it is through this and other types of partnerships and investment type agreements that we will be able to provide our younger citizens access to specialized health care services they need to live full and productive lives."

The WPP held the first-ever diagnostic scoliosis clinic for children in Dominica on Friday 09th July. This is being described as a significant achievement by the DCFH. During that clinic, about 25 children were seen by medical professionals.

Scoliosis is a condition where the spine twists and curves to the side. It can affect people of any age, from babies to adults, but most often starts in children aged 10 to 15.

"This is yet another significant achievement by the Dominica China Friendship Hospital," Dr. James reported. "The significance of this achievement was that over 25 children were screened yesterday by the orthopedic consultant from the WPP and the most acute cases of spinal problems will be earmarked for surgery at a later date."

Executive Director for the WPP Eastern Caribbean, Lauren McIntosh, says with the signing of the MOU, the project will hopefully see more children.

"It is our intention that we are able to see more Dominican children… the MOU outlines our commitment, both from the Ministry of Health as well as WPP in terms of making sure that we are able to identify more children in the community from Dominica and ensure that they have that critical paediatric care afforded to them," he said.

"We all know that in most situations, more often than not, it's always those at the lower end of the economic ladder that faces the brunt of the issues…," Minister for Health, Dr. Irving McIntyre, who signed the MOU on behalf of the Ministry and Government stated. "When we have such programmes in place it's just a matter of how we put people first. It's just how nonprofit charitable organizations can partner with governments to provide these sort of services that we need for our less fortunate children in our developing countries."

The WPP sees individuals from birth to 21 years of age. This not-for-profit organization provides a range of services to include medical treatment for general orthopedics, scoliosis, urology, ophthalmology, general surgery, (reconstructive) plastic surgery, and neurosurgery.

"What we've found in the region is there is a demand for general surgery and scoliosis." WPP's Executive Director disclosed.

"Yes, we have been assisting with children and seeing children from Dominica since 2008 but what the MOU essentially does is that it formalizes our commitment and that of the Ministry of Health in terms of our partnership moving forward," McIntosh said.

Under this MOU Dominica is now expected to fork over EC$83, 970.00 per year to the WPP as part of this investment agreement.

"There is this formal contribution, an investment and it indicates the partnership that the Ministry of Health is really taking a vested interest in the children of Dominica and support the World Paediatric Project," McIntosh said.

There is no deadline on this MOU and children are expected to benefit indefinitely under this agreement.

As part of the Hospital's vision, Dr. James revealed that "very shortly we'll be formalizing other agreements with access to specialized services within and outside of Dominica. All with the intention of developing our capacity to respond to specialist care of the population."