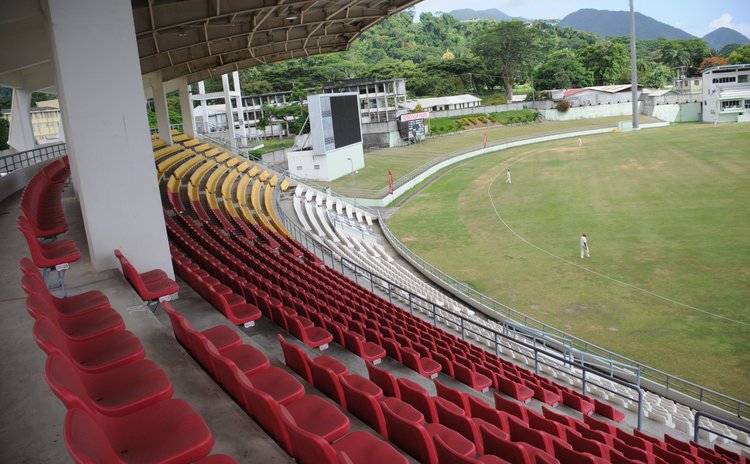 Empty stands during a cricket game at the Windsor Park

It is a sad sight.

A group of youngsters dressed in white are playing their hearts out at a game of cricket. But there is only a sprinkling of spectators watching their exploits.

This depressing scene is replicated day after day, week after week and year after year at most cricket matches across the Caribbean except for the biggest T-20 games.

The startling drop in spectatorship at local and regional games is a major concern for cricket enthusiasts like former national cricketer and veteran commentator Ossie Lewis.

He commented that attendance has been dwindling even at the Test match level in Dominica and the situation is worse at other venues in the region.

"In regional cricket, the spectatorship is not great, unlike before …," Lewis said, noting that a few decades ago international games at Dominica's Botanic Gardens would have up to 9,000 spectators.

"When you played for the island, it was a really big thing…" he recalled, because crowd support motivated players. He described the paltry attendance these days as a "tremendous contrast".

Back then, there was only radio coverage of big cricket matches, Lewis said, so spectators would go to the ground in droves with transistor radios to see the action and listen to the commentary.

Today, big matches are broadcast live on TV with the action shown from different angles and other gimmicks. This might have contributed to the decline in spectatorship, Lewis suggested.

Lewis said that the crowds for One Day International (ODI) and T-20 cricket matches are better than those for Test cricket, which might reflect a change in spectators' tastes.

"People find the test matches tedious," he said, except for "purists" who grew up loving the longest and most challenging format of the game and consider it to be "the real thing".

"The average spectator today would have grown up with T-20s and ODIs and for them a test match would be too long," Lewis said.

According to Lewis, another main reason for the steep drop in attendance at cricket games in the Caribbean is the decline of the West Indies team as a cricketing power.

In the late 1970s to mid 1990s when the WI team was the undisputed supreme cricketing power in the world, their games attracted huge crowds because they used to win, Lewis recalled.

Remarking on sparse spectatorship at the school cricket level, he remembered that inter-schools cricket and athletic meets were a big thing back in the day.

"The school children now don't come to watch their peers. Not even the people close to those playing come [to watch]" he lamented.

"In my young days, athletic meets at schools … were a big, big thing. People would turn out, schools would turn out … parents and relatives would come to back their children.

"Now, schools would be playing and you would have about 20 or 30 people watching in the park," Lewis said, noting that it would take a concerted effort to reverse this trend.

One solution to the spectatorship problem might be for parents to take their children to look at cricket matches and teach them the nuances of the game and build their interest in sports.

While sports should not be encouraged at the expense of academics, Lewis said children may be growing up being told that they should focus on academics while sports take a back seat.

The lack of spectator support might have contributed to a decline in the standard of cricket because "playing over and over . . . to empty grounds might have a deterring effect," Lewis said.

Development Officer, Mervin Thomas shares Lewis's concern about declining spectatorship and believes that efforts can be made to make cricket more attractive to spectators.

The public should feel like they are part of what is happening in the games, he added. One way of doing this is to provide tempting incentives to spectators, he said.

Furthermore, Thomas contended that cricketers have a responsibility to attain the highest performance standards to encourage spectators to come out and see them play.