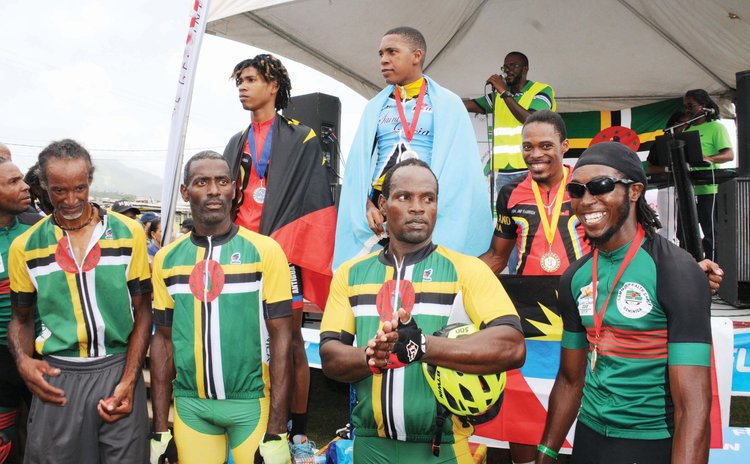 National Pride at an OECS Cycling Competition: Some Members of the Dominica Team

Sports associations had their programmes, some, terminally halted after the event of Hurricane Maria in September 2017. In spite of having to curtail some of its activities, the Sports Division set the tone as early as 2017 from which other associations picked up.

-The ICC hosted a T20 match between West Indies and World XI at Lord's to raise funds for five countries including Dominica afflicted by Hurricane Maria in 2017. An estimated 15,000 patrons attended the match at 30 pounds sterling. Pakistan's Shahid Afridi of the World XI made a personal donation of US$20,000 to the charity fund.

-Dominica's Yawani Registe was one of two Windwards' players chosen on the CWI U-15 team for a tour of England last August. The other player was Akim Auguste of St Lucia. Grenada won the Windwards competition in SVG. Dominica placed after St Lucia and St Vincent.

Emmanuel Nanthan resigned as president of the DCA after more than 20 years in administration at the local level which expanded to the region and internationally.

-Underminers routed Termites in an all-Bataca final in the KT20/20 tournament. The champions scored 201-3. Kershaski Jno Lewis and Odiamar Honore were unbeaten on 90 and 56 respectively while Ezekiel Cyrille and Fitz Frederick bagged 3 wickets for 4 runs and 3 wickets for 6 respectively in Termite innings of 48 in 10.2 overs.

-Sagicor Somerset for the 2nd year running defeated Police to capture the Fort Young Hotel Intermediate cricket championship. Somerset asked to bat first got 169 runs in 39 of their 40 overs and then bowled out Police for 109 in 29 overs.

The Dominica Football Association (DFA) scrapped their programme of 2017-2018 and came up with the Flow Nation's Cup which encompassed all interested teams across the country starting in January.

Belfast Estate Mahaut Soca Strikers edged out NCS Bombers by one goal to nil to take the championship prize of $10,000 and trophy. Nick Anthony scored the winner for Strikers. Bombers of Portsmouth got the runners up prize of $7,000. Petro Caribe Pointe Michel beat Exodus FC 2-1 in the first of the double header at the Windsor Park SS to take the $3,000 third place award.

Harlem United zone B winners of the DFA Under-20 football competition defeated Step by Step Bombers in the final to win $5,000 at Portsmouth. The runners up got $2,500. -National coach Rajesh Joseph Latchoo of T&T had his contract with the DFA extended by two years after the initial 18 months.

Dominica drew 0-0 with Surinam in their opening match in the Concacaf Nations' League played in Guadeloupe; and won vs St Kitts/Nevis 2-0.

-Dominica came away with four points from their campaign in the (Confederation of North & Central American and Caribbean Association Federation) Concacaf Women's World Cup qualifiers in T&T. Dominica won against US Virgin islands 3-0, drew with Grenada 1-1, and lost to T&T 3-0 and St Kitts & Nevis 2-1. Romelcia Phillip scored four of Dominica's goals.

-Dominica's U-15 girls returned from Florida with 1 win 3 losses.

-Enthusiastic promoter of juvenile sport Dunstan 'Maggie' Peters was appointed a scout for Dominica and St Lucia by a German group. A Maggie promoted footballer Delroy Parker who obtained a scholarship in the US was spotted on the website and leg to the appointment.

-Dominica were 4th from 6 teams in the Concacaf U-20 qualifiers in Florida with wins vs St Kitts/Nevis 2-1 and Martinique 2-1. Jamie Parillon scored Dominica's goals. Dominica went down to Canada 0-5, Guadeloupe 0-3 and Panama 0-4.

-Adriola Lawrence of Castle Bruce Secondary School (SS) and Jamal Augustine, DGS joined more than 40 boys and girls in the decisive round of the Flow Manchester United Experience at Old Trafford, England in Trinidad. The two emerged from the local qualifiers held at the WPSS.

Cycling was one of the associations which took 2018 with gusto. The association held nine local races all starting on Goodwill Road by the Woodbridge Bay Port to Portsmouth or Colihaut or to Layou sometimes doubling or trebling the course or to Canefield and back to where they started. -17 Year old Kohath Baron of Pichelin won five of these races to emerge the D Ccling Association's champion.

The association also hosted the OECS (Organisation of Eastern Caribbean States) championship for a second successive year because of the success of the 2017 effort.

Kohath went on to win the cadette category of the John T Memorial race in Anguilla. Bram Sanderson was the elite category winner at the A&B Challenge Race by edging out Jeffrey Kelsick by 0.5 second in 1:16 hours over 25 miles.

Sports Officer Godwin Dorsette was elected presented of the Dominica Amateur Athletics Association (DAAA) for the inaugural 4-year term. He got 12-5 against Cedric Harris. Danelson went on to clock 21.30sec at the semi-finals of the Inter-Secondary Schools championships at the Jamaica National Stadium.

-Treneese Hamilton won two bronze medals at the Carifta Games in Jamaica in girls' U-17 discus and shot put. -400m runner Derrick St Jean got a scholarship to attend Clarkston University in Carolina.

-Sharome Burton was honoured as the top young sports journalist from a field of 35 at the World Youth Games in Argentina.

-Kalinago Territory captured 40 of 60 medals at the Special Olympics held at the Botanical Gardens. A team seven and five reserves was selected to attend the Abu Dhabi Games in 2019.

-St Lucia claimed the ECCB OECS U-23 championship with victory over SVG in A&B. Dominica placed 4th from six teams.

-The Dominica Netball Association (DNA) with the backing of the DOC attained full membership with the International Netball Federation.

The members of the Dominica Amateur Basketball Association gave the executive a mandate to continue managing their affairs up to the 2019 AGM.

-Kelver Darroux, MP for the St Joseph constituency sponsored a competition to fill the breach left by Hurricane Maria amounting to $7,000. Team Ice Cream won the competition with D-Tread Blazers winning the ballorama competition and prize of $500.

-Dominica sent a junior handball team to Chicago to participate in the International Handball Trophy America and Caribbean Zone qualifiers. Dominica won against Haiti 38 goals to 36 after losing to Martinique 19-42, USA 15-46 and Canada 19-62. Nathan Benjamin scored 45 goals for Dominica.

-Addisa Burton and Ethlyn Lockhart defeated St Lucia at the OECS beach volleyball qualifiers in A&B to advance to the World Youth Games in Argentina.

-Fencing has become very active in the past year so that Dominica was able to send a team away where they came up against fencers from El Salvador, Dominican Republic and Mexico.

-Following instructions from IABA, the international body for boxing Job Joseph and his team had to go through a second ballot observed by IABA officials. The poll in July was squashed.

-Dangerous Public Enemies of Mahaut came through as the team to beat after capturing the Guinness 4-hand league championship 2-1 in a best of three finals with Rebels of Fond Cole. Rebels were again at the receiving end in the J Astaphan & Colbeck Ginger Wine Knockout competition losing the final by more than 1,500 points. Dangerous Public Enemies ran away victors 4,009 points to Rebels 2, 501.