Sports in Review: Nothing to shout about in 2016 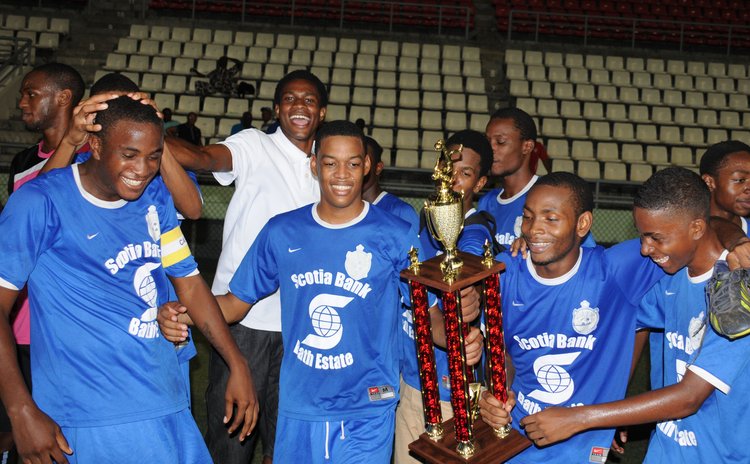 Newtown Juvenile Football Academy (White and Black uniform) plays the Bath Estate Football Club (Blue and White uniform) in the Finals of the DFA All Island League on Saturday 5 June 2016.

-St Lucia won all but one of their six matches or 10 points to capture the Winlott Windwards Under-15 Cricket tournament in Dominica.

-Former Dominica and Windwards opening batsman Lockhart Sebastien was named a selector by the WICB.

-Volcanoes' Mervin Matthew was among the top three bowlers after the group stages of the WICB Nagico Super50 tournament.

-Dublanc came away with $5,000 plus their trophy for winning the Prime Minister Skerrit Harris Paints Northern Cricket League. -Southern District won the DCA Under-19 competition.

South's Alick Athanaze was best batsman and bowler and he also scored the only century. Dion

-Head coach of the men's national team, Shan Shillingford resigned following Dominica's exit at the second round of the CFU Caribbean Cup.

-Randolph Peltier who played with Club Loubiere copped awards for most goals (joint) and MVP of the opening Delnagis Soccermania in the Fast Cash Harlem Football League (HFL) at Newtown (NT).

-Caribbean Cool present Harlem United with more than $2,000 worth of football uniforms made up of 20 sets for players and five sets for officials.

-The Rookies of the Year were Suejete Cuffy of Mahaut Soca Strikets and Shervon Dorsette (m) of RIC Kensbro respectively. Top referee was Clyde Cadette.

-Randolph Peltier scored a hat-trick of goals to lead Rosalie Bay Resort Charlottevillers to a 4-1 win over defending league champions Aeropost Dutch United to the 2016 Sign Man Cup of the HFL.

-Bert Motors Young Stars shut down Randolph Peltier of Club Loubiere in the final of the HFL to lift the Fast Cash championship by two goals to nil.

-The DFA named Martinique champions of the Windwards women's football tournament in Roseau.

-Dominica's representative team lost on penalty kicks at the quarter-finals stage of the regional Guinness Street Football in St Lucia. Curacao won the final against T&T 1-0.

Thea Lafond female triple jumper based in the USA was Dominica's second athlete at the Rio '16 Olympics as an unqualified athlete. Dominica's other participant was Cuban-born Yordanys Garcia also in the triple jump discipline.

Fast Prowlers emerged as Dominica's best basketball team. Beaten in back to back finals by D-Tread Blazers, Prowlers knocked out Blazers at the semi-final stage on their way to taking care of Fashionline Falcons of Pichelin 3-1 in their best of five finals.

-Dominica in their first appearance in the Caribbean Basketball Confederation (CBC) U-16 championship in Guyana lost group A matches to A&B 34-113, Bahamas 21-125, British Virgin Islands 37-82 and Barbados 43-78. Dominica came out ninth with victory over T&T 65-43.

-Portsmouth Breakers swept defending champions CT Kings 2-0 in their best of three finals for the division II championship. -Dominica had wins against Bermuda 3-2, Grenada 3-1 and St Maarten 3-1 for third place in the OECS U-23 championship in A&B. Dominica lost to A&B and St Lucia by 3-0 margins.

Boxing made a public appearance with a six-card bout at the Massacre hard-court organised by Job Joseph, boxing coach and enthusiast. The public support surprised Joseph.

Andy Carter and sponsorship of Big Edges Financial Express gave hope to tennis with the staging of a youth tournament at the DGS hardcourts towards the end of the summer holidays.

Rounders: Grand Rising Stars in only their second year won the national rounders league for 2016. They beat Dublanc Almond Stars 2-0 in their best of three finals.

-Athlete Shanee Angol, DSC and formerly of Pierre Charles Secondary School was named Sportswoman of the Year. Cricketer Tyrone Theophile of Desiderata Tremors was Sportsman of the Year.