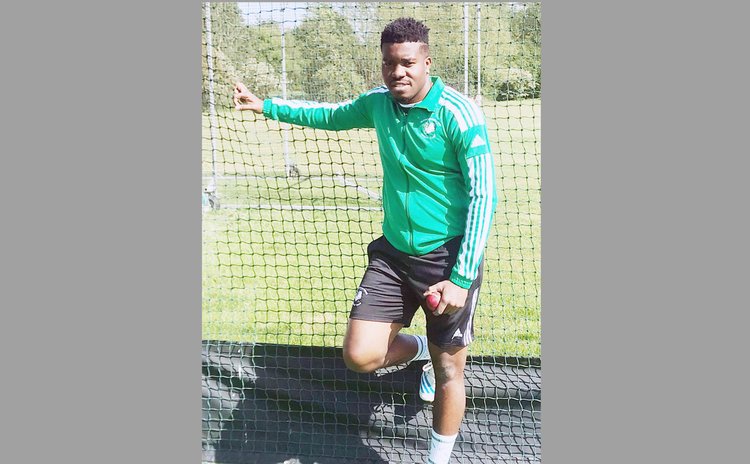 Marigot native Brian Joseph has always had an appetite for runs and long innings.

Before he knew how to tie his shoelace, ride a bike, and many of the other energetic things his young friends would engage in, the then three-year-old Joseph already knew how to swing a bat, hit the ball, and run like his youthful life depended on it.

"My love for the game started in my village, just playing on the road with friends. Though I didn't understand everything there was to the game like I do now, I just loved playing cricket," he told the Sun.

And though many doubted that this young man, who was being raised by his grandmother could go far, Joseph said that he never allowed that to hinder his dream of becoming the next Brian Lara.

A few years down the line, his hunger for runs reflected in his exceptional performance on the field and he was tipped to be the next big thing. It wasn't long after that Joseph would begin receiving recognition for his skills and would represent Dominica at the Under 13, U-15, U-17, U-19, and U-23 levels with the Windward team

Now 24 years old, he has received an opportunity of a lifetime to participate in a cricket league in England; a dream made possible by former Dominica and West Indies off-spinner Shane Shillingford, former Dominican cricketer who played for the Windward Islands in the West Indian domestic cricket, Thomas Zephaniah Kentish and Ken Williams.

In his quest to greatness, he recently took seven wickets in an innings, including a hat trick, proving right his statement "believing is achieving."

"I used to always tell myself one day I will make it far, I have to reach places, I will be able to represent my country, and here I am doing it today," the youth acknowledged.

Upon his return to Dominica in September, the Marigot cricketer has his eye set on playing for the Windward Islands Volcanoes where he will be able to represent his country at the first-class level.

Another goal of his when he's back home is to be an inspiration and guidance to the youths, particularly young cricketers who wish to follow in his footsteps.

"I want to teach the upcoming cricketers to believe in themselves, and to have a love for what they do because I know from experience that without these two things, you're not able to make it far," the young man said. "I also want to pass on the knowledge which I have developed over the years to them."

Joseph is also hoping that cricket can be played more on the island to attract more youths like himself to the game.

From humble beginnings, all the way to the big fields in England, this week's sports rising star vowed that his best is yet to come.