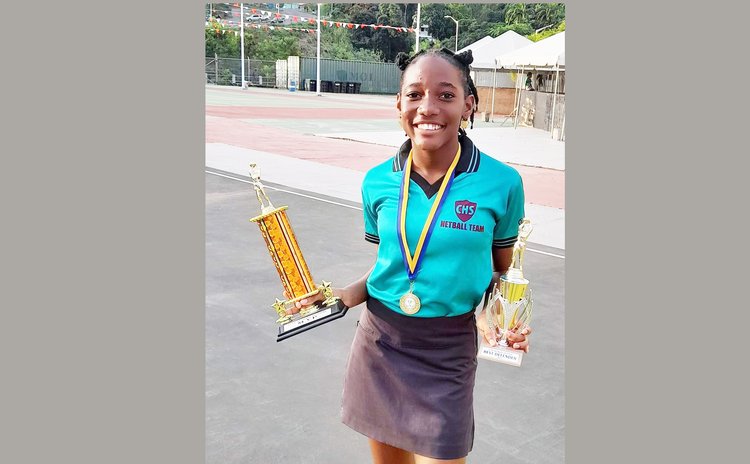 Growing up Brianna Phillip's first experience of the sport of netball was from the sidelines, where she would keenly watch and make mental notes of how the players manoeuvred on the court.

Though still very young, Brianna looked forward to attending those weekend games with her mom and dreamt that one day, she too would have the opportunity to be a star player.

"I was desperate to get onto the court from a very, very early age. Netball runs in my bloodline, so I grew up hearing my mom, aunt, and cousins talk about it, which only made me want to be like them even more," she told the Sun.

While attending the Convent Preparatory School, Brianna got her first opportunity to further her dream of being a pro netballer when she enrolled in the school's netball club, a decision the now 14-year-old says, has changed her life.

With hard work and practice, Brianna played a pivotal role in leading her team, the Convent High School A team to victory last week in the Under-14 Netball Festival.

The Bathe Estate resident had her shining moment at the end of the tournament as she was awarded the best defender and Most Valuable Player (MVP), which she says brought a sense of accomplishment to all of her hard work.

Brianna who hopes to be a future accountant also lauded her mother, Aretha Charles, a former netball player, and coach Julia Johnson, for their guidance, wisdom, and training which she acknowledges has gotten her this far.

Though many may view it as just another sport, or a pastime activity, for Brianna it is her greatest sense of connection and relief.

"Netball is like therapy to me, because whenever I have a lot of work or I feel stressed, netball always helps, though I get nervous before the game when the whistle blows and the game starts my mind goes at ease," she said.

In offering words of encouragement to her fellow peers, who may also have an interest in sports, the soon-to-be fourth-form student stressed that patience is key.

"I have been in netball since primary school and it's only now that I'm getting a trophy and being recognized. Though I could have given up on the sport in the beginning when I wasn't as good, I didn't, I decided to stay, I believed in myself and gave it my best, which paid off for me last week," she stated.

To quote former US soccer star Mia Hamm the "little girl who fell in love with the game and never looked back''. That, in many ways, is this week's Sports Rising Star, who hopes to one day make a name for Dominica in the sport of netball.

As for her next moves, she hopes to capture a few more wins with the CHS and in the future join the national netball team.