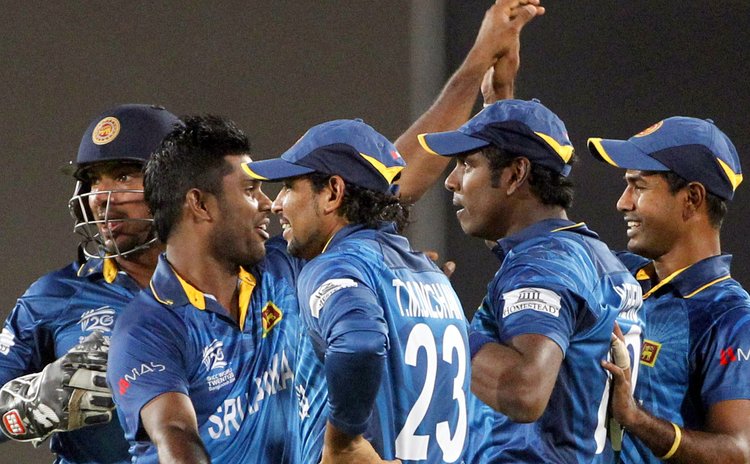 Batting first, India set a modest total of 132 runs for four wickets in their 20 overs at Sher-e-Bangla National Stadium in Dhaka's Mirpur.

Sri Lanka, which was desperate for the glory having missed out twice in the past years, chased down the target in 17.5 overs losing four wickets.

DPMD Jayawardene and NLTC Perera also contributed 24 runs and 21 runs respectively in the efforts of Sri Lanka to chase the target and secure their first World T20 Cup.

KMDN Kulasekara,AD Mathews, HMRKB Herath claimed one wicket for Sri Lanka who won the toss and decided to bowl first.

Sangakkara, adjudged man of the final match, said all credits go to the Sri Lanka bowlers who were brilliant with their pace and spin for restricting India to a modest total.

V Kohli, who was selected man of the tournament, scored the highest score of 72 runs for India.

MM Sharma, R Ashwin, A Mishra and SK Raina claimed one wicket for India who were the first World T20 Champions after defeating Pakistan by 5 runs in the final in 2007.

The second event in 2009 was won by the previous runners-up Pakistan who defeated Sri Lanka by 8 wickets in the final in London.

In the third tournament in 2010 the winners were England who defeated Australia by 7 wickets in the final at Kensington Oval, Barbados.

The fourth tournament, the 2012 ICC World T20, was held in 2012 in Sri Lanka. The winners were West Indies who defeated Sri Lanka by 36 runs, their first appearance in a World cricket final since 1983 and their first victory since 1979.

The International Cricket Council (ICC) World T20 is the international championship of T20 cricket. The event is generally held every two years, and all matches are accorded T20 International status.

16 teams participated for Men's title this time and 10in the Women's tournament, which was played alongside the Men's tournament.

Australia Women beat England Women by six wickets in the final of the World T20 in Dhaka's Sher-e-Bangla National Stadium on Sunday for the third time.