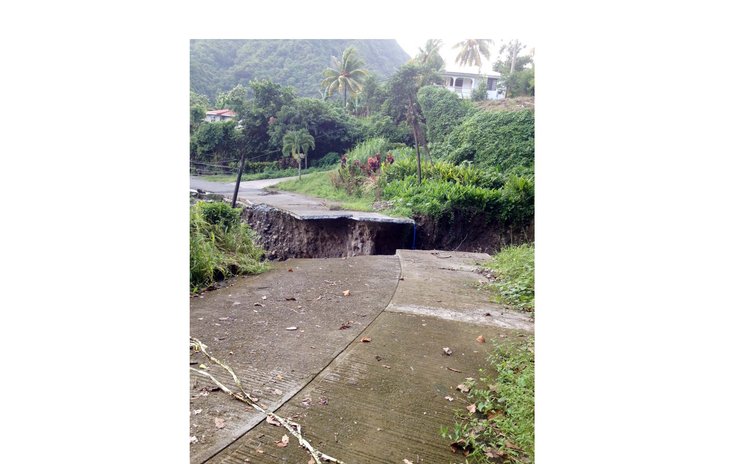 Gorge between Delices and LaRoche

Approximately EC$ 4 million has been approved for rehabilitation works in the Delices and Boetica areas, Parliamentary Representative Petter Saint-Jean announced at a press conference on February 26.

After Tropical Storm Erika the south-east communities of Delices and Boetica were cut off from the rest of the country.

Since then the Boetica Bridge crossing has been constructed.

"This EC$4.6 million will address all of the compromised areas between Laronde and Pointe Mulatre; of particular interest is works that will be done in the upper Laronde area addressing road re-alignment," said Saint-Jean.

Saint-Jean added that work groups will rehabilitate the roads in the Ravine Wash area in Boetica where a rock slide compromised the road.

"Additionally, works will be done in Morne Magic in Delices and importantly in the Victoria Bridge Crossing costing in the excess of $1 million will be put in place," he said.

Saint-Jean said drivers of vehicles are still unable to access the Victoria end of Delices. However, work-men are constructing a by-pass road through the La Roche Catholic Church.

"In fact some $40,000 have been approved for the completion of this project," he said.

Saint-Jean noted that work is also ongoing in the La Plaine community at the cost of $80,000.

He said that work is currently ongoing by placing slipper drains at various parts of the community such as Case O' Gowrie, Plasisance and Balizier.

"In fact, a team of engineers and the two parliamentary representatives namely Ivor Stephenson and yours truly we had a visit to the Morne Aux Delices area with a view of looking for alternative access routes into the South East," St Jean said.