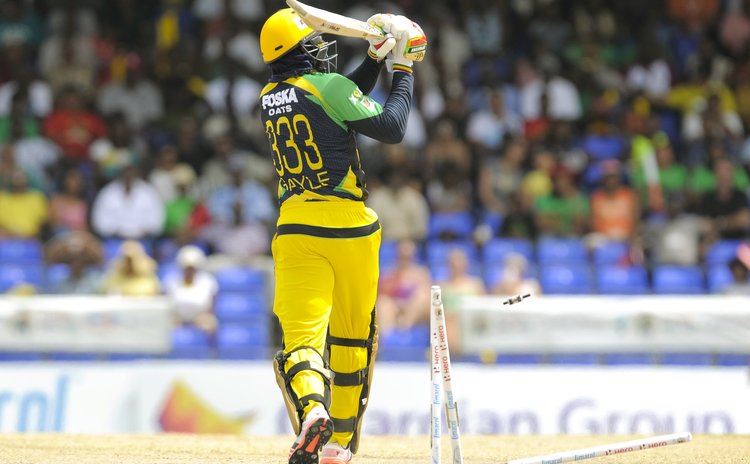 Saturday 4th July – Basseterre, St Kitts: The St Kitts and Nevis Patriots bounced back from yesterday's defeat in the Hero Caribbean Premier League with a comprehensive victory over the Appleton Estate Jamaica Tallawahs. A brilliant 82 from the Patriots' Evin Lewis set up a target of 200 and the ever impressive Sheldon Cottrell saluted his way to figures of 3-15 as the home side won easily against the 2013 CPL champions.

Opening the batting with Martin Guptill, Lewis recorded his highest T20 score and his first significant contribution for the Patriots. Having impressed last season with the Red Steel, these runs for his new side will have delighted the young batsman.

The openers had made 71 in just over seven overs when Guptill became the first wicket when he shuffled across his crease attempting to work Rusty Theron to mid-wicket. He missed and the ball struck his pad as he was dismissed LBW having made 35 off 25 balls.

Lewis kept on going, bringing up his half century with a brilliant drive for six that was clubbed back over the bowlers head. Lewis combined with his captain, Marlon Samuels, as the two men put on 72 runs at 10 an over. For once it wasn't Samuels that looked the most fluent of the Patriots batsmen as Lewis was brutal on anything that was short. Perhaps his best shot was the six he pulled in front of square off Jerome Taylor.

Samuels never really got going and he was happy to just give the strike to his young partner. In attempting to run the ball down to third man for a single, Samuels was caught by the keeper off the bowling of Andre Russell.

Lewis looked like he was all set to make his first Twenty20 hundred when Shahid Afridi set off for an ambitious single only to see the opener run out for 82 off 45 balls. That brought Carlos Brathwaite to the crease and once again he made some quick runs. His tournament strike rate is over 200 and once again he was finding the boundary on his way to 36 in 18 deliveries, his highest T20 score.

Brathwaite should have been dismissed in the 19th over when Horace Miller dropped an easy chance in the deep, and that mistake allowed the big all-rounder to guide his side to 199-5.

The Tallawahs began their chase knowing that success or failure could well rest in the hands of Chris Gayle. Having made successive undefeated half centuries in his two previous innings, he was the man in form. It was not to be as Sheldon Cottrell dismissed him with a full delivery that Gayle swiped at and missed.

While the loss of their captain would have been hugely disappointing for the Tallawahs, there was still the batting available to chase down this total. Cottrell had other plans as he picked up the wicket of Chadwick Walton, giving him a chance to pull out his salute celebration for the second time in two overs.

Chris Lynn could well have departed next ball if not for a remarkable piece of good fortune. The Australian batsman inside edged the ball which appeared to clip the stumps on the way past. The stumps were left intact and the ball raced away for four.

The required rate for the Tallawahs was getting out of control by the end of the Powerplay with the Jamaican side just 37-2 off their first six overs. Things only got worse when Mahela Jayawardene was run out for nine.

When Lynn also fell to the excellent Cottrell for 20, the required rate was more than 13 an over with the best of the Tallawahs batting back in the dugout. From that point onwards the result was never in doubt as wickets continued to tumble.

Afridi, who has had limited success in the tournament to date, bowled a maiden on his way to figures of 2-10 as he, and fellow wrist spinner Tabraiz Shamsi (4-23), took a stranglehold of the middle overs of the Tallawahs' innings from which they could not escape.

The Tallawahs crumbled to 80 all out as the Patriots secured victory by a massive 119 runs.