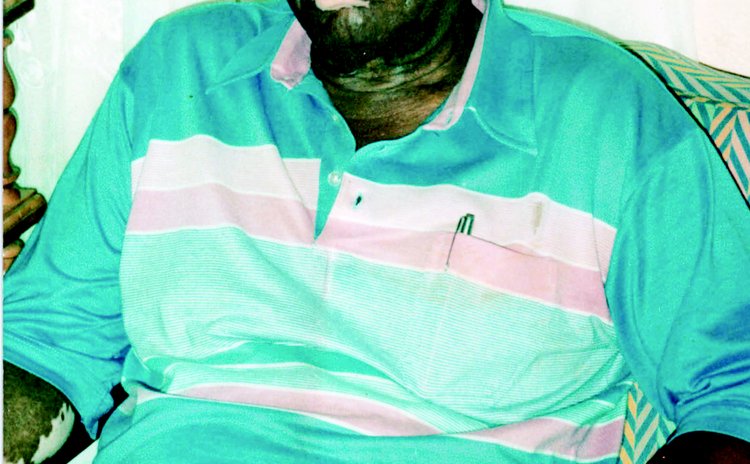 This outspoken and strongly passionate Dominican died at his home in Goodwill aged 93 years on Monday March 25 about 7:30am after spending just over a week at the Princess Margaret Hospital.

The SUN met with some of his children to glean out something about this formidable individual, some might think, restless individual who came to the sunset of his life.

"Well, I suppose there are a couple of words I could use to describe Star Lestrade: Frankly, growing up as a boy, as a teenager, the word "order" comes to me mind. O R D E R. Daddy always emphasized the importance of maintaining good order, keeping things in order, and be tidy; and don't forget he was in the army of course, he did active duty in the Middle East, I think, so that I think he carried that military style, that military personality into the way that he ran his home, the way that he brought up his children and so on.

"Another word one could use was passionate. Daddy was passionate about everything that he did. He had very strong views. He wasn't shy to express them. Frankly, he was quite fearless, quite courageous. Of course that got him into trouble with a lot of people. It didn't make him very popular. I mean, the fact that he served in all political parties in Dominica, I think, makes the point. I suppose you could say he didn't suffer fools gladly. When he had issues with persons he would not hesitate to let them know how he felt, and how he felt about them. And I guess the issues that they stood for. So that he was constantly searching for a political home, if you like, within which he could be comfortable.

"He loved cricket. He was passionate about cricket. He played in the first division league in Dominica. I think his best bowling performance actually was 7 for 64. I found out in recent years that he still kept the ball actually that he used in that innings in that bowling spell. He kept that home. Actually, I have it now with me at my home. So he was a guy who was searching. He was passionate. He was quite an activist.

He got quite frustrated, I think, in his later years. I think he got quite frustrated at the fact, that, as far as he was concerned, he was not sufficiently officially recognised, and he didn't enjoy National Day, the late October early November period. I think that every time that time came around he felt a bit of frustration at the fact that he thought he wasn't recognised by the country. And I think those frustrations were evident".

"What I remember most about Daddy, when we were growing up and still in school: whenever we would hear a bad pronunciation on the radio, he would promptly turn the volume down, and ask us what was wrong with what we just heard? And he would give us the correct pronunciation.

"And something else I remembered about him, when we were a lot younger and we would go to parties with our friends, if we were not invited, and our friends were invited, and asked us to come along, when he found that out, Josette and myself, he told us: Never go to a party you are not invited to. You could be treated like a dog, and it would be your fault. I never mopped another party after that".

Stafford Sebastien 'Star' Lestrade shared the birth date of two outstanding Caribbean personalities, Nobel Laureates Sir Arthur Lewis, Economic Sciences 1979 and Derek Walcott, Literature, 1992 of January 23. Star was born on January 23, 1920 at La Plaine. He attended the La Plaine Government School, and before he could find his professional role in life the Second World War erupted in Europe. Star Lestrade like youth across the British colonies enlisted and went to St Lucia for training of Windward Islands recruits. From there he was dispatched to Egypt and the Middle East where he saw active service along with other Dominicans like the late John Chambers.

Stafford Lestrade survived and returned to Dominica after the end of the War in 1945 and married Dorothy Lawrence (deceased in August 2000) of La Plaine on Boxing Day, 1946. The couple lived and worked in Roseau from thereon before moving into their own home in Goodwill in 1955. At the time, Star's home was only the third above the Federation Drive Round-about. By then he was a trained accountant having pursued his profession via correspondence course.

Stafford Lestrade lived life to the full. He was one of the pioneering members of Credit Union movement in Dominica and a founding member of the Roseau Cooperative Credit Union. He was the one who drove Sister Alicia all over the country in his old buggy car.

His favourite pastime activities were gardening, politics and reading. He loved sports and was passionate about cricket, which he played in the division I league.

He was the mayor of Roseau for six years around the 1960s. He founded his own political party called Peasants and Workers Movement, and was later identified with the Dominica Freedom Party until he fell out with leader of the Freedom Party Dame Eugenia Charles (dec'd), then the Dominica Labour Party (he would edit the DLP's newspaper, Educator in the 1980s) and after that the United Workers Party.

Star Lestrade also contested the Federal Government elections in Dominica in the 1950s but lost out to former Premier Edward Oliver Leblanc and Phyllis Shand Allfrey.

Oh, he was a powerful platform speaker who spoke with fire and conviction, and he was that good he could be described as a rabble rouser some might say "Joe Lumiere" especially in those days when Prime Minister Patrick John seemed to have lost his way. As Dominicans prepared to stand up to two pieces of perceived punitive legislation of Labour governments in the 1970s, Lestrade's oratory reached new heights with his "Blood ahoy!" from the political platform.

Oh, he was fearless and a no nonsense sort of person. He also found himself commenting on cricket, and descriptions like "this one crept like a zandoli" to a bowled ball keeping low, is the stuff of legend.

He was also editor of the Dominica Herald newspaper. He penned a column in the Herald under the pseudonym "VonVon" (buzzing black bumble bee).

He was once a strong member of the Catholic Church and part of the Full Gospel Businessmen Fellowship, but like so many of his pursuits, his ego maybe, got in the way and he would leave in a blaze and go on to become a member of the Pentecostal faith.

That was Star Lestrade. He would go to his office in Roseau up to the turn of the century before he finally gave it up as business died out for him.

This vocal strong willed son of Dominica came, he saw and, in his own way, conquered.

Maybe the recognition he was denied in this existence will be fully conferred on him by the God whom he tried to serve to the best of his abilities. But he made his mark on this country's landscape.