Jump Ball No. 74. By Arlington James 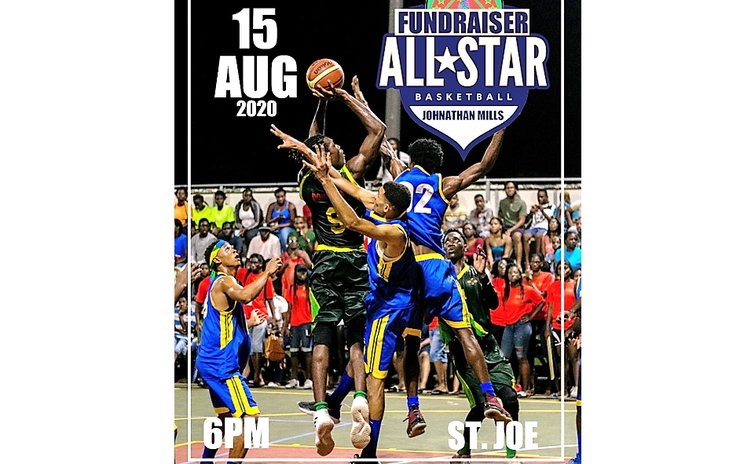 During the 54 years of organized basketball at the national level in Dominica the administrators of the national league from time to time have come up with some rather creative fund-raising initiatives. The aim of such events has been primarily to raise funds to enable the Dominica "National" Basketball Team to participate in some overseas engagements, or simply to increase the organisers' gate receipts.

For example, in May 1969 the Basketball Sub-Committee of the Dominica Amateur Sports Association organized a very successful, well-patronized walk-a-thon which was dubbed, Belle Marcher Pont Cassé. The 280 sponsored participants who completed the grueling 31-mile course, started walking from Roseau, continued along the West Coast Road to the Hillsborough Bridge, then up the Layou Valley to the Pont Cassé Round-about, down the Imperial Road to Canefield, and back to Roseau. Many non-basketballers participated in that event.

Five years later the Dominica Amateur Basketball Association (DABA) staged a Marathon Basketball Match at the Windsor Park Hardcourt in May 1974. This event involved scores of "sponsored" basketballers from the national league, playing on two teams only: Coloureds and Whites, in a whole-day affair. A total of nine players amassed triple-digit scores, with the highest player-score being a hefty 168 points!

Nineteen years later, on the night of the finals of the revived Windward Island Basketball Championship held in June 1993, the game (Dominica vs Grenada) drew a larger partisan crowd through a heavy entertainment line-up that included a Lapo Kabwit, cheerleaders, A & M Sound System and the WCK band. Dominica won that championship.

This year (2020), DABA teamed up with 767 Sports Club and DA Sports Vibes to raise funds through an "All-Star" event, to financially assist Jonathan Mills, a Dominican attending school and playing basketball in Florida, USA. Interestingly, the President of the DABA, Dunstan "Maggie" Peters is also President of the 767 Sports Club and has strong links with DA Sports Vibes.

The event was originally carded for Saturday 8th August 2020, at the St. Joseph Basketball Court, but inclement weather forced a postponement.

Local Celebrities vs Under-18 Team: Come 15th August, however, the weather was beautiful, and the first segment of that evening's proceedings bounced off with a Local Entertainment Celebrities Team taking on a Dominica Under-18 National Team. The game was won by the Under-18 Team whose Sharmar Felicite emerged as top-scorer and MVP of that game.

The President vs The Legend: The second segment of the inaugural event pitted the DABA's President against former Cardinals and national player, Fletcher LeBlanc in a "Rough 21" encounter dubbed, "The President vs The Legend". Fletcher won that event 21-13, but Maggie pat himself heavily on the back for having made a concerted come-back effort from an early mauling. An interesting gentleman's agreement which was a condition for the playing of that game was that the loser would shave off his beard after the match.

Chief organizer Maggie was quite pleased with the turn-out of the public as well as the participants in the three events, with the Hot Skulls Sounds System providing entertainment and a food bar keeping the patrons' taste buds working overtime.

The joint team of DABA, 767 Sports Club and DA Sports Vibes acknowledged the contributions of the Dominica Olympic Committee, as well as Algernon Jervier (former Venoms and national player from Scott's Head) and Omar Monelle for providing shoes and the jerseys respectively for Fletcher and Maggie for the Rough 21 encounter.

A box was passed among the crowd soliciting donations and returned a reasonable $523.55, while the Food Bar netted $489.95 in "surplus after expenses."

Following on the success of the first edition of the fund-raiser, the organsiers decided to do a repeat on Saturday 29th August 2020, at the same venue. The three matches billed for Volume II were Celebrity All Stars vs Legends of Basketball, Females North vs Females South and 767 All Stars vs D-Treads Blazers - the second most decorated team in Dominica's basketball history.

Jump Ball wishes to acknowledge the contribution from Maggie in providing information for this article and wishes him and the DABA all the best in their future endeavours.