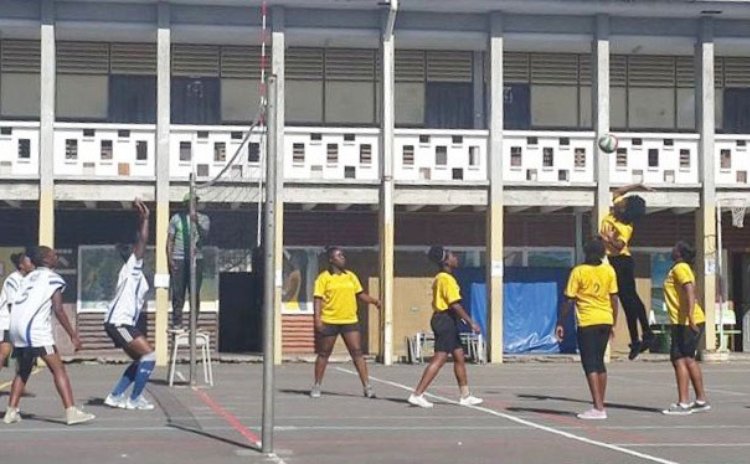 The men's team of Dominica State College (DSC) secured a place in the play-offs of the Sports Division Under-20 volleyball championship by beating all comers in the round robin stage of the competition. DSC cruised past Pierre Charles Secondary School (PCSS), Castle Bruce SS (CBSS), Portsmouth Secondary School (PSS) and Dominica Grammar School (DGS) in straight sets (3-0) and Isaiah Thomas Secondary School (ITSS) 3-2.

DSC remained to play North East Comprehensive School (NECS) who also had a match in hand versus CBSS following 3-0wins over ITSS, PSS, DGS and PCSS. The top team goes straight into the final with numbers 2 and 3 meeting again for an opportunity to lift the top prize.

The female defending champions Portsmouth Secondary School (PSS) were out of championship. The teams in contention for the title were Dominica Grammar School and Dominica State College in Zone A and Castle Bruce SS and Isaiah Thomas SS in Zone B.

Zone B had Castle Bruce SS posting wins over Goodwill SS and Portsmouth SS 3- 0 and ITSS 3-2 and a match to play against NECS. ITSS secured the runners up spot with 3-0 wins against PSS, NECS and GSS.

Four-time back to back champions of the United Insurance Secondary Schools Under-20 cricket competition, Dominica State College were in a difficult place to make it five successive championships.

DSC had 10 points from their only match played from their match with zone leaders, Castle Bruce Secondary School, who finished with 28 points from their three matches. Confronting DSC were North East Comprehensive School on 18 points and Portsmouth SS on eight points.

St Mary's Academy (SMA) were virtually through to the semi-finals from Zone A after finishing their four matches with 38 points. Pierre Charles SS and Isaiah Thomas SS were both on 28 and had a confrontation scheduled to see which advanced to the play-off round. Dominica Grammar School were on 31 points but would be overtaken by either or both of PCSS and ITSS no matter what the result. Goodwill SS ended with 19 points. The semi-finals were planned for the Windsor Park Sports Stadium and Botanical Gardens on February 18 and the two-day (Feb 25-26) final at the WPSS. Balata House of PCSS won the opening ballorama at the Botanical Gardens for back to back titles for their school.

Portsmouth Secondary School Under-14 netball team sponsored by First Charles Delight were in the mix to salvage a championship for their school after ceding the Under-16 and Under-20 titles to Dominica Grammar School.

In the early stages of the competition, PSS defeated Castle Bruce SS by 14 goals to three in Zone B.

North East Comprehensive School also took advantage of CBSS by 29 goals to two. CBSS also added another win against Isaiah Thomas SS by 30 goals to 14. In Zone A, Convent High School comfortably took care of Wesley HS by 26 goals to four while Goodwill SS edged out Dominica Grammar School 5-4 after 40 minutes of play.