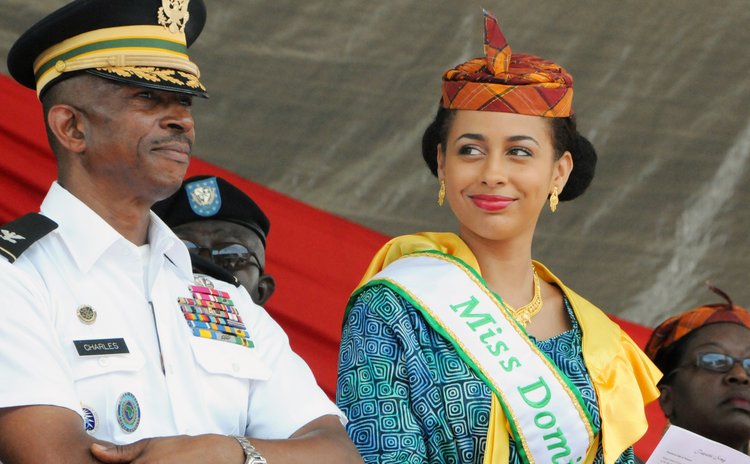 You wish you were the Colonel? Me too! Miss Dominica and Colonel Eddy Charles of St Thomas at the Rally

Miss Dominica, Leslassa Armour-Shillingford, says youth is "the present" and not "the future".

It's easy to stay young, forever. All you have to do is see beauty in everything. That's what young and beautiful Miss Dominica, Leslassa Armour-Shillingford, told the National Youth Rally held at the Windsor Park Sports Stadium on Friday.

"Anyone who keeps that ability, that ability to see beauty never grows old," the Dominican Miss World Contestant said. "Personally, I believe you can stay youthful if you find that thing that will always be beautiful to you, that thing that makes you wake up and feel excited, that thing you never wanna stop doing."

The Youth Rally was attended by hundreds of young people from schools across Dominica, in spite of a call for a boycott of the event from the opposition United Workers Party (UWP).

The UWP asked Dominicans to stay away the Youth Rally and the Parade of Uniformed Groups on Independence Day; the party believes the manner in which His Excellency President Charles Savarin was elected by the House of Assembly was in contravention of the Constitution and that President Savarin, a trade unionist of the turbulent Seventies and a partisan and vocal supporter of the ruling Dominica Labour Party, was unsuitable to hold the post of Head of State. The Government of Prime Minister Roosevelt Skerrit ensured that the boycott did not become an embarrassment by taking the unprecedented decision to order schools in the Roseau catchment area to close and to attend the rally. It worked.

Later, the Government reported that students from 61 primary schools, 16 secondary schools, the Dominica State College and eight uniformed groups took part in the Youth Rally. During his speech at the event, Petter St. Jean, the Minister for Education and Human Resource Development, obviously referring to the UWP call for the boycott, asked students to shy away from negativity and to be careful of those who may try to misguide them for selfish political gains.

Although she did not refer directly to the call for the boycott of the youth rally, Miss Dominica told the students at the Windsor Park Stadium that they must not "waste the beautiful gift of freedom"; she reminded them they must always stand for their right to free speech, a right that was not always available to people in many countries.

Leslassa then claimed that the popular statement "youth is the future", needs to be redefined.

"Let's review that statement and say loud and clear that we are the present," she said. "And right now we will make a difference."