Steve "Black" Jno Lewis: "Water was reaching me near my chest" 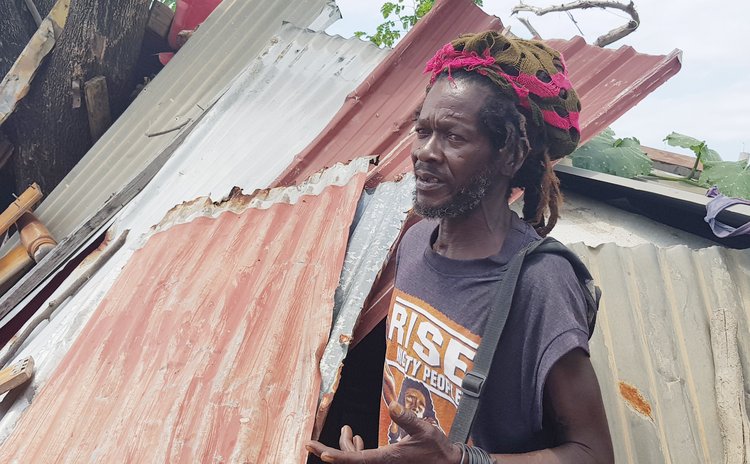 Steve "Black" Jno Lewis is a household name in that Pottersville community known as Baytown; he lives on the shoreline there where the sea constantly caresses the land. Understandably, fishing is Black's life.

On September 18, 2017 Black, as he is popularly known, was in his home on the beach or shoreline in Pottersville, in a makeshift structure of loose galvanize sheets, awaiting the wind and the rain of Hurricane Maria.

"First time in my life I see a hurricane so…if I was not good for myself, all now so I would not have been talking to you, I would have been a dead man. Zang, (his girlfriend) was holding my shirt for survival. I lost everything that I had. I use a cart to wash vehicles on the side of the road," he said.

Black continued: "I never knew the storm was going to be so bad but I had to fight my way among the thousands of stones on the road to safety. I had to hold barbed wires, some burst in the process, as I try to go to safety in the toilet. On arrival we met three others there and they saying we die. But I pass hurricane David and I know what it is to struggle in a storm. It was dark and I had to crawl on my knees for safety.

He said the nightmare continued even while seeking shelter in the toilet.

"While in the toilet I had to burst a window to get air and to survive since it was filled with water which was reaching me near my chest. I could not find Zang and even said that she was dead. I got several cuts on my way to survival; all on my back had bruises."

He said that after the storm he went fending for himself because he had no food.

He said that he has many children at Silver Lake and having worked for over ten years with the Government, building drains Pond Casse to Roseau, he deserved better treatment.

"I left to go Guadeloupe to check vibes. My mother died and so I am there in the struggle fishing and washing rides as a living ….not even a tin of milk I get and I have been supporting the party...I collected old wood and boards after the hurricane and rebuild my house on the bay. I have nine kids and a number of grandchildren; I am 65 years old now. I am ashamed at my situation and how I have to hassle for a survival. I don't steal. All I do is struggle for survival, and I have never stolen people's things since I know myself."