At a march, last week children pleaded with adults to stop abusing them 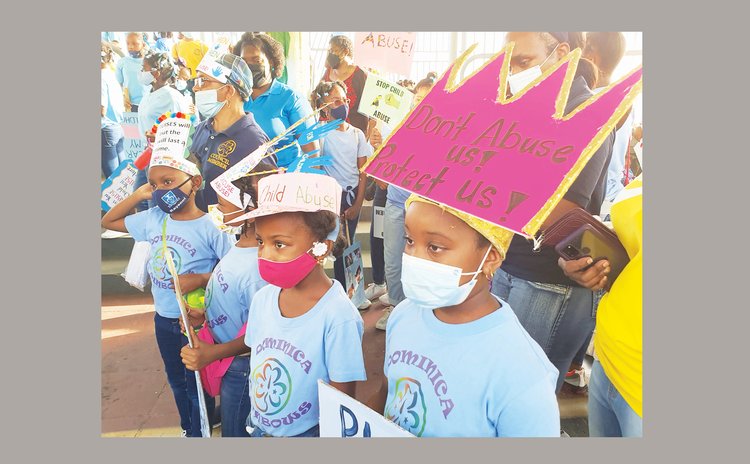 Children at the child abuse march at the Roseau Bayfront

They rose their voices for their fellow sister and marched determinedly for the end of child abuse; they celebrated children who are alive and carried placards for the missing; they begged adults - some relatives - to stop abusing the children.

They begged neighbours to report abuse - of any kind. They implored communities to become parents of every child and urged the authorities to make alterations to Dominica's laws and judicial systems.

But most importantly, as young as they are, the children as young as three years old, accompanied by a few adults marched to end and raise awareness on the preventative measures to the ongoing, exacerbating pandemic of child abuse in Dominica.

Conceptualised by the Girls Guides Association of Dominica (GGAD), June 17, 2021, marked the official start of a series that will be held every third Friday of each month to bring to light the importance of protecting children in society from abuse and neglect and to strengthen child abuse prevention efforts in our community.

Speaking during the march, training and programme commissioner of the GGAD and one of the lead organizers behind this initiative, Miss Marica Dublin, noted that the upsurge in child abuse cases coupled with the response from certain members of the public really drove the women and girl's organization to take action.

"The future of our nation is going down the drain. Our children are not safe in their homes, not safe at school, they are not safe at church, so where on earth are we putting them," she questioned. "They go to the state home and they are abused at these homes, so Lord in heaven what is it that we are doing for our children? When are we going to say enough is enough? We need to do right by these children?"

According to Dublin, before it is too late, serious action needs to be taken by all members of society as child abuse affects every facet of the nation.

"We keep asking ourselves, why are our young people behaving in this antisocial way? Why are our young people so aggressive and violent, they are aggressive and violent because you violated their rights since they were babies. You destroyed their childhood and they have nothing to look forward to. You've deprived them of love, you have deprived them of basic care that they need," the child advocate declared.

The long-serving executive member of the 93-year-old organisation which boasts a membership of over 400 females, acknowledged that though it may not be an easy task, the organization stands ready to work hand in hand with all able-bodied men and women to protect the children from the ongoing abuse.

She went on to lament Dominica's age of consent, by stating, "at 16, you're still a child, but our laws are stating that it's okay at that age to go out there and bring forth a child."

"How on earth can that be, ''she questioned. "To put an X by a parliamentarian's name to get him into office, to go behind a vehicle to drive you to have to be 18. They're saying that you're not responsible enough to do these basic things, so how can they be responsible enough to take care of another child when they are just children, how can a child take care of a child?"

"Our laws are backward and we need to begin to put them in order. We need to change and we need to make some recommendations and we need the politicians to take the political wheel and make a difference," she continued. Dublin went on to note that as a nation, we have become too divided and alluded that such an approach will not help the problem of child abuse, but further enhance it.

As such, she issued a call to all citizens to join the GGAD on their quest to end the abuse of one of the most vulnerable groups in society and to raise greater awareness of the prevention of such.