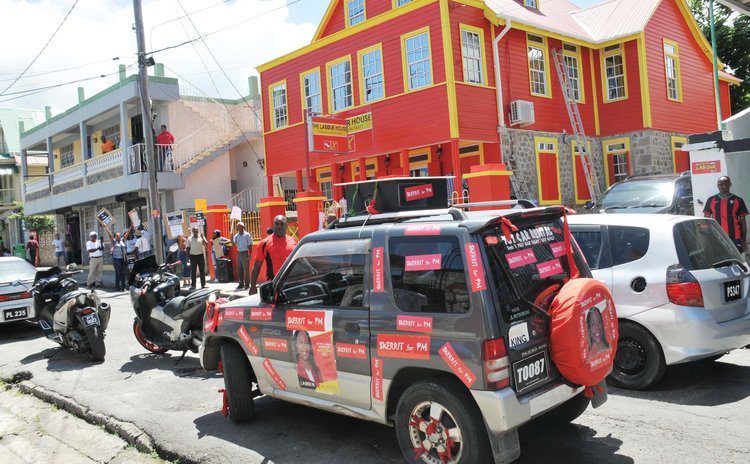 It was like holding a lighted matchstick to a can of gasoline but for some reason the anticipated explosion did not occur.

It began when about eight supporters of the opposition United Workers Party (UWP) gathered outside the Dominica Labour Party (DLP) building carryings placards that read: "Where is the Money. 1.2 Billion Dollars; "Account for the Dollars or Get Out"; "Caught Red-handed"; Oti l'argent Nous. Where is Our Money".

As he walked up and down the sidewalk, a young man shouted the words written on his placard: "Broad Daylight Robbery."

Another man carried a large Dominica flag as he sauntered on the sidewalk near the Labour House.

Soon the group of protesters moved to safety as a worker, dressed in a white vest and black shorts, began power washing the sidewalk and the walls of the building near the protesters.

As the number of protesters grew, and a man began speaking from a loudspeaker, a grey and black mini Mitsubishi Pajero jeep, decked with red flags and posters of DLP candidate Dr. Adis King, parked near the placard-carrying protesters. Then the occupant of the vehicle pumped up the sound of his loudspeakers, blasting away the protestors. Afterwards, a DLP supporter setup a microphone on the veranda of the DLP building and started a campaign-like speech.

Meanwhile, during last week the UWP held similar protests in Portsmouth and in Roseau. It continued on Monday, 26 August, when a small group held a protest at the roundabout in Pound Case. The sporadic protests began when attorney-at-law Ronald Charles, the UWP candidate for the Roseau Valley Constituency held a one-man demonstration near the Fort Young Hotel.

The UWP has apparently taken the issue of unaccounted money from the Citizenship by Investment (CBI) programme to the streets.

Earlier this month, in his response to the 2019-2020 national budget presentation of the Prime Minister, Roosevelt Skerrit, leader of the opposition Lennox Linton said the amount of Citizenship by Investment (CBI) revenue that was reported for the financial year 2018-2019 was short by a billion dollars which, he argued, should have been accounted for.

But Prime Minister Skerrit has dismissed Linton's claims saying it reflects his inability to understand the budget process.

Skerrit said there were no funds unreported from the CBI programme and that Linton's statement lacked analysis and objectivity.

The UWP has planned a "Where the Money Gone" meeting in Lagoon, Roseau on Thursday night, as the 2020 political campaign begins to heat up.