Hurricane season 2018 starts and the fear and worry begins 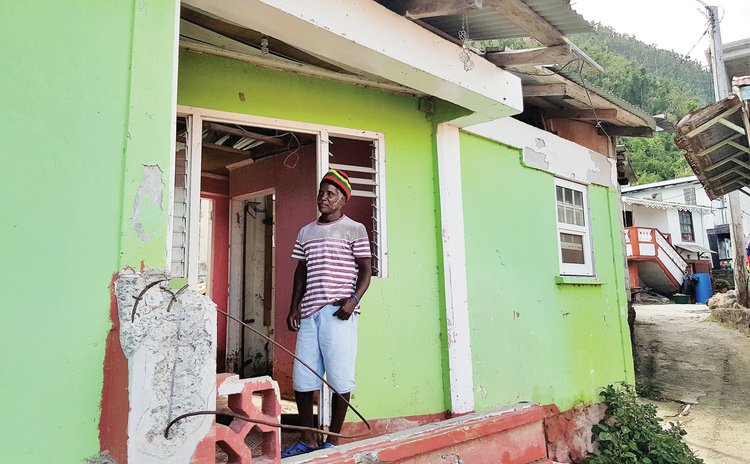 Johnson Casimir, a resident of Pointe Michel and his dwelling house

As he anticipates another series of storms, Johnson Casimir, a resident of Pointe Michel, is scared.

"Whenever I hear rain I shiver," Casimir said. "The hurricane season is on us and we don't know what is coming our way."

Casimir lives near the Siboulie Ravine which caused death and destruction in Pointe Michel during Hurricane Maria on 18 September 2018.

During that traumatic night Casimir and his sons, Jason and Janson, narrowly escaped the raging waters that, he said, rose to four feet inside his house.

"We lost everything. I no longer have a place to call home," he said. "God saved us. I have never seen the ravine in such raging mood and I can tell you I don't want to witness another storm like that."

Apart from his belongings Casimir lost friends and neighbours. "I miss Edith, my neighbour whose house was swept away. Also Ann and her children and grandchildren," he said wiping tears from his eyes.

Casimir's story can be replicated many times as Dominicans face the fear of the possibility of another storm like Maria. Many persons are not prepared either physically or mentally.

"Our level of preparedness for the 2018 hurricane season is unsatisfactory", said Pastor Randy Rodney who is also an insurance agent. "I very much understand that we are coming from a category 5 hurricane and one does not expect all the work to be completed."

But Dominica is not alone in the Caribbean when it comes to preparedness. The Caribbean Disaster Emergency Management Agency (CDEMA) reports that "countries are aware of their plans, making the requisite preparations" but some "face limitations primarily resources".

"There is still work to be done to enhance the redundancies of the national communication systems. Few countries demonstrated satisfactory or beyond competence," the CDEMA stated at a press briefing last week.

CDEMA has warned that the region expects "another busy, above the 30 year average season" with 14 named storms, seven hurricanes and three major hurricanes of category three or stronger. In Dominica although government continues in its quest to make Dominica the world's first climate resilient nation some persons are concerned about the equitable distribution of post-Maria resources. "Government has not done enough as far as equitable help for the people is concerned and I say that with no apologies," said Rodney. "Some people who don't need materials have gotten from government and have it stored while there are others who are suffering and are yet to receive."

Rodney added: "There should be some psychosocial programme already in place preparing people for that hurricane season…we are not ready. We need programmes to get people to calm their nerves".

"We are prepared even though we are having some challenges for hurricane shelters," Pascal said. "All I want to say to people is to be prepared".