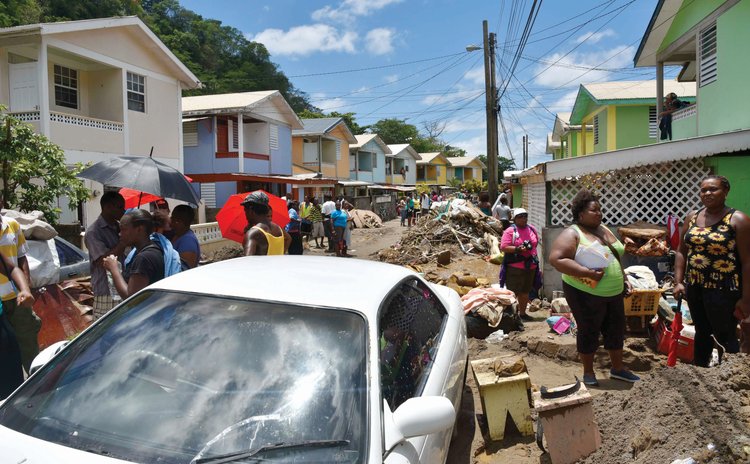 Bath Estate residents who lost their homes during Tropical Storm Erika feel trapped in a vortex of uncertainty and are seeking a clearer picture from Government on the way forward.

Several victims from Bath Estate are still living at Youth Centre building in Roseau after being made homeless by the August 27 storm.

He said three persons from the Bath Estate Bridge area are also still at the shelter nearly three months after the storm.

The Sun understands that some displaced residents from Petite Savanne are also at the shelter.

Paradise Valley was officially declared a disaster area after the storm, and among victims displaced by the storm were residents of Dead End in Bath Estate and several long-time riverside squatters.

Francis said that the official government report indicated that the storm surge from the Roseau River in the Paradise Valley area rendered eight houses uninhabitable.

Apart from those at the shelter, many persons who lost their homes have been living with family members or renting elsewhere.

Up to press time, the displaced Bath Estate storm victims said they had no clear indication from Government on the status of plans for new, permanent housing arrangements for them.

However, Francis said Government is renting alternative housing for those who owned homes lost in the storm, and is paying part of the rent for those who were tenants in affected homes.

Francis said he is concerned about the future of storm victims who were impoverished squatters and who might fall through cracks in the re-housing effort because they did not rent or own property.

He said an underprivileged woman who squatted in Paradise Valley for many years is concerned about a rumour that squatters will be left out of the relocation drive.

Francis said he has asked for an official report from the authorities on the way forward for Bath Estate storm victims, but up to press time he had not gotten one.

Outside of permanent alternative accommodation, affected residents will also need new appliances, furniture and other essential items to replace those lost in the storm, Francis said.

He spoke of one storm victim from his constituency who lost all his tools during the storm and is now unable to ply his trade and, therefore, is without a stable income.

Francis mentioned another family who live every day in their dangerously compromised home in Bath Estate, only leaving at night to sleep elsewhere.

The Parliamentary Representative said he met with Prime Minister Roosevelt Skerrit a few weeks ago and was told that the information on the area was still being assessed and compiled.

However, Francis said he understands that a report has since been presented to Cabinet, which he learnt has articulated a position on Paradise Valley, but it has not been made available to the public.

She said one of the main priorities of the displaced storm victims at this time is getting help from Government and other agencies to replace household items they lost during the storm.

Walsh said donations of food are being distributed to Bath Estate storm victims, and Government, churches, the Red Cross and other agencies are giving assistance.

She is concerned about the state of the Bath Estate River, noting that some riverside residents were recently asked to evacuate when the river became swollen during heavy rains.

Walsh said the debris and rubble caused by the storm have been cleared, but it is clear that the area needs a new and improved drainage system to mitigate the constant threat of flooding.

One Bath Estate resident said the community is thankful for the support from Government, private sector and other agencies, but more help is needed because many lost all their household items.

The resident said a high volume of water swells the Roseau River during heavy rains and makes Bath Estate vulnerable to flooding, especially because there are no retaining walls on the river banks.

Further, residents complain that the bridge near Dead End that was washed away should be rebuilt in another location because it was damaged several times during heavy rainfall.

As Bath Estate storm victims seek clarity on the way forward, they expressed their hope that a proper assessment of the situation would yield effective improvements to mitigate natural disasters.