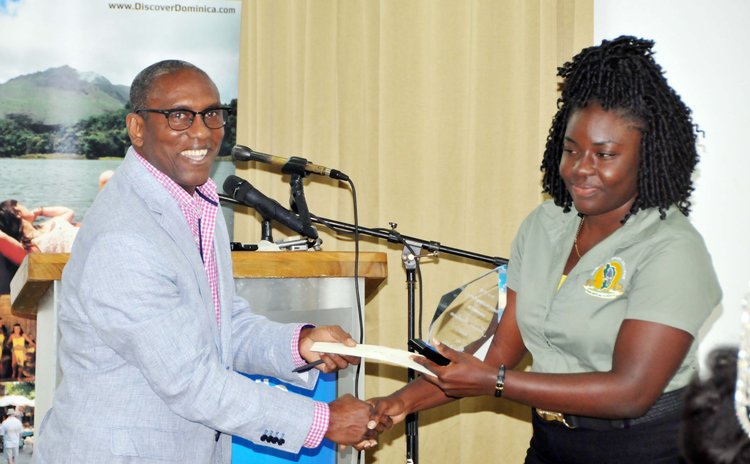 Janae Jackson is the first calypsonian to receive the Nation Building Calypso Award.

Attorney-at-Law Duncan Stowe presented the award to Janae, the only female calypsonian at the 2016 Calypso Finals, at the Mas Domnik 2016 Prize Giving Ceremony on February 24.

Janae secured the award with My Love, My Country, her 2016 Calypso.

The other contenders for the award were: Daryl Bobb – Mama Dominica and Earl White Jr – Fait Vit.

"In an effort to encourage songs that mirror patriotism, that is love for country, I dare to make an annual contribution in Dominica to the calypsonian that presents the best written composition with respect to the theme nation building," said Stowe.

He said the idea came from the Calypso season in St Lucia where he observed that a businessman there gave an award for the best nation building song.

Stowe stated that Calypso has always been and will always be critical of governments and those in authority with its sometimes controversial commentary.

He added that he recognized that in recent times only a few Calypsos promote the physical attributes of the Nature Island's people and heritage.

"Such a void which was once filled by the Independence Calypso competition for decades now does not exist," he said.

In addition, he said, he hopes that the annual award for the Best Nation Building Calypso will add some level of diversity in the Calypso competitions and at the same time show appreciation for the land of our birth.

"The criteria in selecting the best song was lyrics-40 points; melody-35 points and nation building appeal- 25 points," he said.

Meanwhile, Chairman of Dominica Festivals Commission Colin Piper in the 2014 post carnival review a goal for carnival was set.

"The goal was to provide an outlet of expression to the various art forms for Dominica's heritage whereby creating an avenue to market the destination to visitors to come and experience the authentic artistic expression," he said.

Moreover, Piper noted at from the 2014 post carnival review the suggestions of the stakeholders were considered and a few have been implemented.

"I am happy to say that Discover Dominica Authority listened to those suggestions, we took them on board or a few that the stakeholders felt was priority…we created a carnival website dominicasfestivals.com; this will now be the portal that one can get information about the main festivals in Dominica," he said.