Strengthening Pesticides Management towards Sustainable Agriculture in the Caribbean 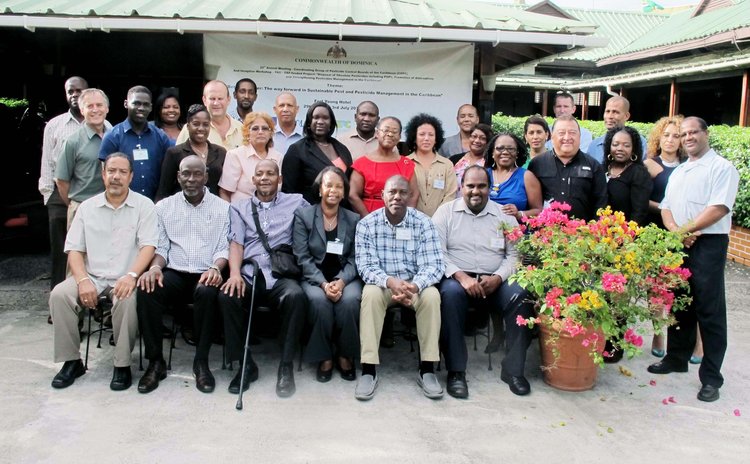 Pesticide control boards of the Caribbean meeting in Dominica

Roseau, Dominica (IICA). Members of the Coordinating Group of Pesticides Control Boards of the Caribbean, CGPC, convened their 20th Annual Meeting to discuss issues of regional importance in the areas of pesticide registration, use and management.

The meeting, which was held between June 29th and July 3rd at the Fort Young Hotel in Roseau, Dominica also facilitated the inception workshop of the Global Environmental Fund (GEF) Project "Disposal of Obsolete Pesticides Including POPs, Promotion of Alternatives and Strengthening Pesticides Management in the Caribbean" being implemented by the Food and Agriculture Organization (FAO) of the United Nations.

At the Opening Ceremony, the incoming Chairman of the CGPC and Director of Agriculture and Chair of the Pesticide Control Board of Dominica, Mr. Ricky Brumant, underscored the importance of protecting human and environmental health, "We must guard against degradation of our ecosystems ensuring that our production base is kept in check and that we are protected from the adverse effects of agro-chemicals which ultimately oftentimes find themselves in our food and water."

The mandate of the CGPC is to promote sustainable agriculture and to protect human health and the environment through effective management of pesticides and chemicals in the Caribbean. This is achieved through collaboration with relevant bodies in order to develop regional policies, programmes and projects in the area of pesticides and toxic chemicals to safeguard agricultural health and food safety and preservation of the Region's environment and natural bio-diversity.

The main outcome of the meeting was the development of the work plan for 2015/2016 for the GEF-funded project on the disposal of obsolete pesticides. The meeting also finalized the CGPC Rules of Procedure, advanced the process for the development of a training manual for pest control operators and recommended a public awareness programme for the safe use of pesticides.

The Annual meeting of the CGPC was in part funded by the 10th European Development Fund (EDF) Project "Support to the Forum of Caribbean States in the implementation of the commitments undertaken under the Economic Partnership Agreement (EPA): Sanitary and Phytosanitary Measures (SPS)", being executed by the Inter-American Institute for Cooperation on Agriculture (IICA). The CGPC's mandate is closely aligned with the SPS Project's overall action which is to strengthen agricultural health and food safety systems so as to increase production and trade in agriculture and fisheries, which meet international standards while protecting plant, animal and human health and the environment.